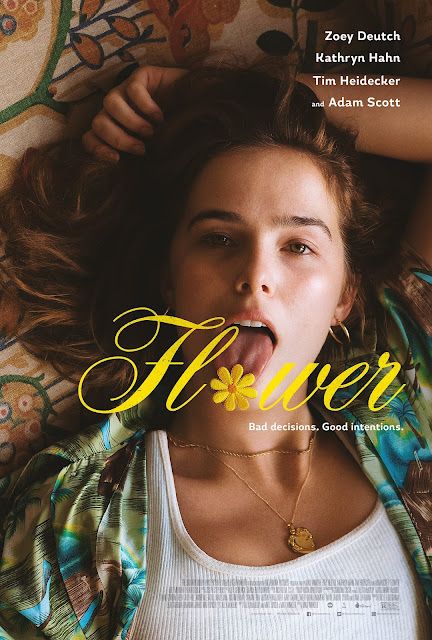 The rebellious teenager character has been a tired trope for many years in film. Although some recent films have added a fresh feel to the character (like Lady Bird), most have failed.

Flower could've been a fresh addition, but it definitely wasn't. The film follows Erica Vandross (played by Zoey Deutch), a rebellious 17-year-old in the Los Angeles suburbs. In order to bail her father out of jail, Erica has resorted to prostitution in order to gain $15,000. Along with prostituting the men, her friends, Kala (played by Dylan Gelula) & Claudine (played by Maya Gashet), film these encounters, & use them to blackmail the men that Erica is prostituting herself towards.

Her mother, Laurie (played by Kathryn Hahn), is about to get married to her recent boyfriend, Bob (played by Tim Heidecker). Erica, Laurie & Bob eventually pick up Bob's son, Luke (played by Joey Morgan) from rehab, which he was in due to his pill addiction. After some awkward moments at first, Erica & Joey form a serviceable stepsibling relationship.

At the bowling alley, Erica, Kala & Claudine notice an older guy bowling with his buddies. The man is Will (played by Adam Scott). When Erica goes with Luke, Luke notices Will, & tells her that Will was a former teacher of his who molested him. Shocked by this, Erica, Luke & her friends decide to stalk him & take justice for his molestation. But they end up getting deeper into this than they could've ever imagined.

The cast is decent. Zoey Deutch shows that she is one of the best young actresses at the moment. Joey Morgan also gives a great performance. However, Kathryn Hahn is absolutely annoying, & Adam Scott feels wasted here.

Max Winkler's direction is underwhelming. Winkler decides to play the film's content straight, instead of capitalizing on some of the comedic undertones of the film.

The screenplay by Max Winkler, Alex McAulay & Matt Spicer is a disaster. The dialogue is terrible, & the plot becomes somewhat disgusting towards the end, which may have worked if said content had been played as more darkly comedic than it ended up being portrayed.

And Joseph Stephens' score is excellent. The score is very ambient in tone, powered by synth music, & is absolutely gorgeous & a joy to listen to.

This is one of the more disappointing films of the year. Although Deutch & Morgan are great, & the score is fantastic, everything else is a mess.

Flower was seen by me at the Landmark Main Art Theatre in Royal Oak, MI on Saturday, March 31, 2018. It is no longer in theaters in the Detroit area. Its runtime is 90 minutes, & it is rated R for crude sexual content & language throughout, graphic nude drawings, some drug content, & a brief violent image.
at April 16, 2018