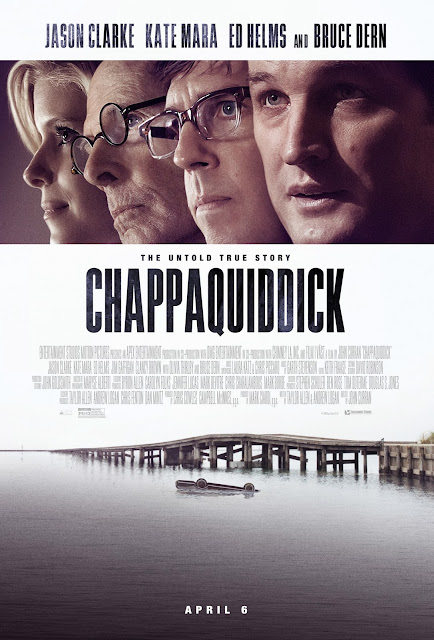 Anyone born in or before 1964 remembers the Chappaquiddick incident. For those who don't know, it was a car accident on July 18, 1969 involving U.S. Senator Ted Kennedy & former campaign advisor Mary Jo Kopechne, where Ted Kennedy accidentally drove his car off of Dike Bridge on Chappaquiddick Island in Massachusetts. Kennedy escaped, leaving Kopechne to drown.

Chappaquiddick, although it does have some script problems, & doesn't answer all of our questions about the incident, is a well-crafted drama. Set in July 1969, the film follows Ted Kennedy (played by Jason Clarke), the young, idealistic U.S. Senator from Massachusetts. Everyone, from his father, Joseph P. Kennedy Sr. (played by Bruce Dern) & his cousin, Joe Gargan (played by Ed Helms), to his friend, U.S. Attorney for the District of Massachusetts Paul Markham (played by Jim Gaffigan), are grooming him for a presidential run in 1972, following in the footsteps of his brothers, John & Robert.

On July 18, 1969, a party is held on Chappaquiddick Island, celebrating the reunion of the Boiler Room Girls, who helped with Robert Kennedy's 1968 presidential campaign, which he most likely would've won if it weren't for his assassination on June 5, 1968. The group includes Rachel Schiff (played by Olivia Thirlby) & Mary Jo Kopechne (played by Kate Mara). Gargan & Markham are also at the party. Kopechne leaves the party with Ted in his 1967 Oldsmobile Delmont 88.

Noticed by a cop, Ted speeds down a road, & turns on to the one-way Dike Bridge. Seconds after he gets on the bridge, Ted drives his car into the water. Ted somehow escapes, & leaves Mary Jo to drown. Ted doesn't report the incident until the next morning; however, the car had been recovered just minutes before hand.

After the incident, Ted is surrounded by the press & the possibility of jail time. With a large group of close confidants, including Secretary of Defense Robert McNamara (played by Clancy Brown) coaching him on what to do in the aftermath of the incident, Ted wonders if he should resign from the Senate, & realizes what damage has been done to his legacy.

John Curran's direction is stellar. Curran directs with a great amount of flourish reminiscent of many classic political thrillers.

And the screenplay by Taylor Allen & Andrew Logan is good. The story is told very well, & the dialogue is very good, but some characters aren't fleshed out very well.

This is an imperfect but very good film. Although the screenplay isn't the best, the film is enlivened by a terrific performance from Jason Clarke.

Chappaquiddick was seen by me at the MJR Marketplace Digital Cinema 20 in Sterling Heights, MI on Friday, April 6, 2018. It is in theaters everywhere. Its runtime is 106 minutes, & it is rated PG-13 for thematic material, disturbing images, some strong language, & historical smoking.
at April 22, 2018