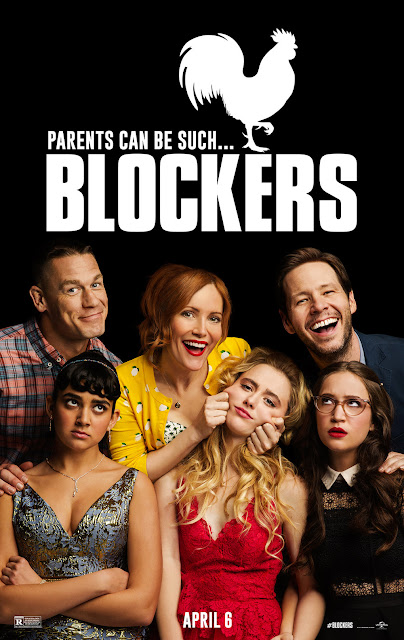 Many comedies focus way too much on dumb, scatological humor, with no room for any heart or smart comedy at all.

Thankfully, Blockers is a godsend for the genre; along with an onslaught of hilarity, it has so much heart in it. The film follows Lisa (played by Leslie Mann), the single mother of high-school senior Julie (played by Kathryn Newton). Since Julie started kindergarten, she has been friends with Kayla (played by Geraldine Viswanathan) & Sam (played by Gideon Adlon). As a result of this, Lisa has befriended Kayla's emotional father, Mitchell (played by John Cena) & Sam's absent father, Hunter (played by Ike Barinholtz).

On the day of prom, Julie & Kayla plan to lose their virginity on prom night. Sam, a closeted lesbian, is reluctant at first, but then joins in on the pact. After Julie, Kayla & Sam leave for prom, Lisa notices that Julie left her laptop on the iMessage page. Through that, Lisa sees Julie, Kayla & Sam's groupchat. Mitchell & Hunter also snoop in on the groupchat. They see a barrage of emojis alluding to the sex pact, but the parents, dumbfounded by the emojis, don't understand them. Eventually, after piecing some stuff together, they realize their daughters have created a sex pact. Lisa, Mitchell & Hunter decide to stop their daughters from losing their virginity, & along the way, they must eventually realize some stuff about their daughters & their coming-of-age, & to let them leave the nest.

The cast is amazing. Leslie Mann further proves she is one of the funniest actresses in film today. John Cena shows he's as great at comedy as he is at wrestling. And Ike Barinholtz is quietly cementing himself as a great comedic actor after his time on MADtv.

Kay Cannon's direction is excellent. Cannon, in her directorial debut, brings a lot of heart to the film, which is a rare feat in comedy. She does this without being oversentimental, like some comedies that tried to add heart but failed have done.

And the screenplay by Brian Kehoe, Jim Kehoe, Jon Hurwitz, Hayden Schlossenberg & Eben Russell is stellar. Along with an interesting story, the dialogue is so gut-bustingly hilarious.

This is one of the best comedies in recent memory. Along with some great comedic performances, this film has a lot of heart & a lot of humor.

Blockers was seen by me at the MJR Marketplace Digital Cinema 20 in Sterling Heights, MI on Friday, April 6, 2018. It is in theaters everywhere. Its runtime is 102 minutes, & it is rated R for crude & sexual content, & language throughout, drug content, teen partying, & some graphic nudity.
at April 22, 2018