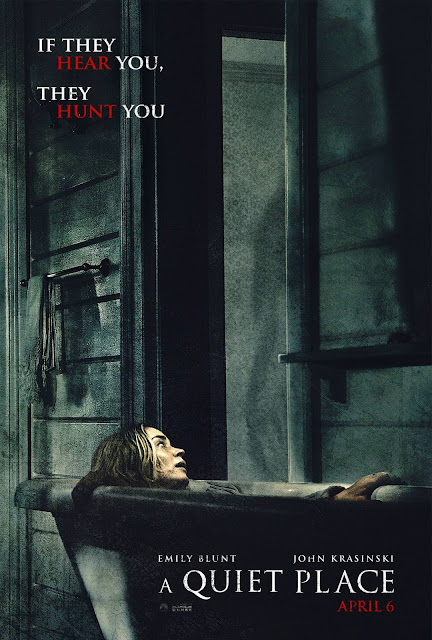 
Most horror films in recent memory (well, mainly over the past 20 years) are the antithesis of what they should be: scary. With the overuse of jump scares for the sake of jump scares, along with terrible plotting & horrendous acting, horror films try to please their target audience, at the expense of what makes horror films truly great.

Last year, we had 3 great horror films that used jump scares & other types of scares really well, along with some excellent plotting & great acting (along with some other great technical achievements): Get Out, It Comes at Night, & It. Each of these films are some of the best horror films of the century so far.

We can now add A Quiet Place to this list. Along with terrifying the hell out of me, it is a well-crafted & excellently acted film. Set in 2020, the film follows Evelyn (played by Emily Blunt) & Lee (played by John Krasinski) Abbott, parents of Regan (played by Millicent Simmonds), who is deaf; Marcus (played by Noah Jupe); & Beau (played by Cade Woodward). Over the past few months, most of the human population had been wiped out by blind creatures with supersensitive hearing. The only way to survive is to stay absolutely silent. In order to communicate, the Abbotts use ASL.

Evelyn is very far along in her pregnancy. Lee spends a lot of time trying to fix Regan's cochlear implant, but to no avail. One night, Evelyn finds herself alone in the house... just as she goes into labor. As a creature gets closer, Evelyn tries to alert everyone to come back & help fend off the creature. But this will be the fight of their lives.

The cast is fantastic. Emily Blunt & John Krasinski (a married couple in real life) have such a terrific amount of chemistry. Blunt is perfect, with every ounce of her performance having an increased amount of realistic maternal instinct. Krasinski is perfect, always determined to fight for his family no matter the cost. But Millicent Simmonds, just like in 2017's Wonderstruck, steals the show. Just like her character, Simmonds is deaf. Simmonds is able to give such a beautiful performance without a single word of spoken dialogue.

John Krasinski's direction is spectacular. Like Jordan Peele last year with Get Out, Krasinski makes the jump from comedy to horror with a directorial debut that, like Peele, is an absolute revelation. Krasinski allows for an overwhelming sense of dread & terror (unlike many horror films, which rely on nothing but half-baked jump scares), & when he does use jump scares, he uses them very well.

The screenplay by Bryan Woods, Scott Beck & John Krasinski is brilliant. There are only about 10-15 minutes worth of spoken dialogue in the film, with the rest being either silent or told through ASL. The story is so intriguing, unlike many horror films, & the film tells the story so excellently without much spoken dialogue, a rare feat in modern cinema.

Christopher Tellefsen's editing is excellent. The film is tightly paced (at a brisk 90-minute runtime), & there isn't an overuse of half-baked flashy editing, unlike many horror films.

And the sound design is phenomenal. The sounds of the creatures are so terrifying, reminiscent of many classic horror creatures. The silence in the film is also very essential, adding to the overwhelming terror.

This is one of the best films of the year, & one of the most terrifying I've ever seen. This is unlike many horror films out there. Along with being excellently acted & well-crafted, the dread is so powerful.