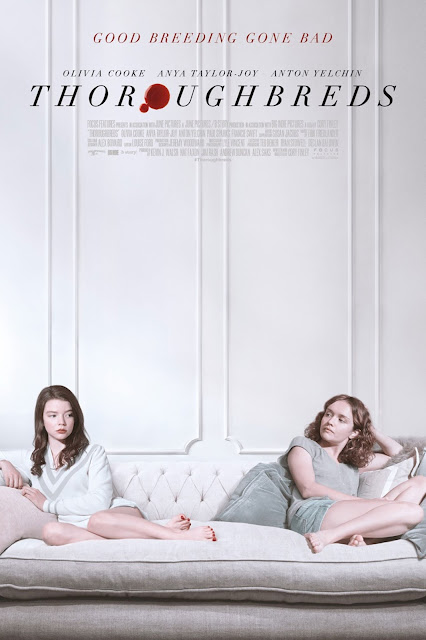 
For some filmmakers, it takes them a very long time to get to a point where they can be considered a great director. For others, they become great right off the bat. Many famous directors, such as Paul Thomas Anderson, Martin Scorsese, Richard Linklater, the Coen Brothers, Quentin Tarantino & Wes Anderson are some great examples of established directors who have been great right from the minute the film started rolling in their debut film.

Thoroughbreds is a scathingly funny & thoroughly tense film that is one of the best directorial debuts in recent memory. The film follows Lily (played by Anya Taylor-Joy), a rich, smart & popular teenager in suburban Connecticut. She feels every emotion possible, & lives with her mother (played by Francie Swift) & her stepfather, Mark (played by Paul Sparks), whom she despises.

Her former best friend, Amanda (played by Olivia Cooke), who feels absolutely nothing, is at Lily's house to hang out & be tutored by Lily, but finds out her mother paid Lily to hang out with Amanda after an incident Amanda committed. Some time after this revelation, Lily & Amanda become friends again.

One night, after Lily tells her about Mark, Amanda asks her if she has ever thought of killing him. Lily denies this & asks Amanda to leave. However, after seeing Mark viciously berate her mother, Lily decides to plan with Amanda to kill him, proposing that Amanda do it, as she wouldn't feel remorse for it.

However, due to the incident Amanda committed, she feels that the prior incident would make her a prime suspect. As a result, Lily & Amanda hire Tim (played by Anton Yelchin), a drug dealer who is infamous for having sex with a 17-year-old when he was 23. But as the ball gets rolling, all of their plans start to crumble around them.

The cast is spectacular. Taylor-Joy & Cooke are 2 of the best rising stars in Hollywood, & they are both at the top of the game. And Yelchin, an actor who had the potential to be a star but went far too soon, is perfect. He is absolutely insane here. His performance is one of the best final performances I've ever seen.

Cory Finley's direction is excellent. Finley, a 28-year-old who had never even seen a film set before this film, directs this with the talent of a seasoned veteran. The film was originally planned to be a play, & that is evident here with the tense, claustrophobic feel in some parts.

Cory Finley's screenplay is brilliant. The dialogue is witty, dark & overall hilarious, & the characters are so well-written. Finley writes with the bravado of a young Paul Thomas Anderson.

Lyle Vincent's cinematography is amazing. Vincent uses a series of excellent long takes that are some of the best in a while.

Louise Ford's editing is excellent. Ford paces the film deliberately slow, allowing the intricacies of the plot to slowly unfold.

And Erik Friedlander's score is stellar. The cello-driven score adds another layer to the highly tense atmosphere of the film.

This is the best film of the year so far. Filled with amazing performances, a killer screenplay & stunning cinematography, I wouldn't be surprised if this ends up on my end-of-the-year list as one of the 10 best films of the year.