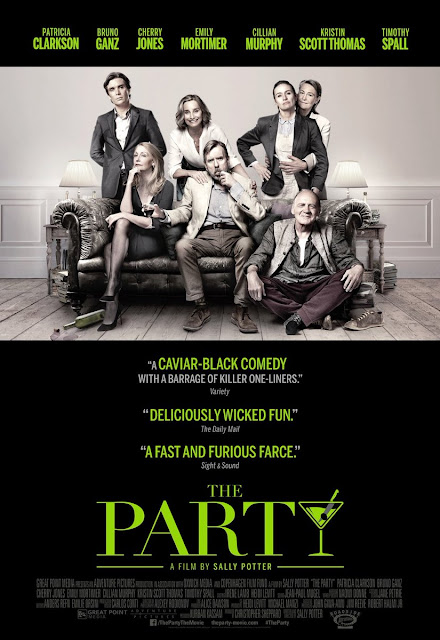 
Since I started my love for film, I've had a fascination with dark comedies. Making light of things that wouldn't be considered funny seemed to rise a lot of laughs out of me. There are some limits, but for the most part, dark humor is my type of humor.

The Party is one of the funniest dark comedies of the decade. The film follows Janet (played by Kristin Scott Thomas), a newly-appointed Shadow Minister for Health for the opposition party in the UK. To celebrate, she throws a dinner party. She invites 6 people: her cynical best friend, April (played by Patricia Clarkson); April's estranged German husband, Gottfried (played by Bruno Ganz), a spiritual healer; women's studies professor Martha (played by Cherry Jones); her partner, Jinny (played by Emily Mortimer), a chef; Janet's colleague, Marianne; & Marianne's banker husband, Tom (played by Cillian Murphy).

The guests arrive, except for Marianne, who Tom says will be coming late. In the living room, Janet's husband, Bill (played by Timothy Spall), stares blankly into space, drinking wine, & talking quietly.

As the drinks flow, revelations start to come to the surface. April & Gottfried are divorcing, Martha & Jinny are having triplets, & Bill is leaving Janet for Marianne. But that's only just the start of this eventful evening.

The cast is spectacular. Kristin Scott Thomas's performance is a more-than-welcome return to the silver screen. After a few years playing in very small films, she's starting to make a comeback. Cillian Murphy is perfect as a neurotic cokehead. But Patricia Clarkson is absolutely fantastic. Clarkson hasn't had this big of a role in years. And when she gets a big role, she shows that she is not to be messed with, & that is evident here. She is absolutely brilliant as a cynical, bitter realist.

Sally Potter's direction is excellent. The direction is subdued, maintaining a tense atmosphere while having a humorous undertone.

Sally Potter's screenplay is brilliant. The dialogue is some of the funniest in years, & is perfectly cynical & mean-spirited.

And Aleksei Rodionov's cinematography is amazing. Shot in black-&-white, this gives the film a darker & more bitter effect, matching the tone of the film.

This is one of the best films of the year. Sally Potter's writing is top-notch, & Patricia Clarkson absolutely steals the show.