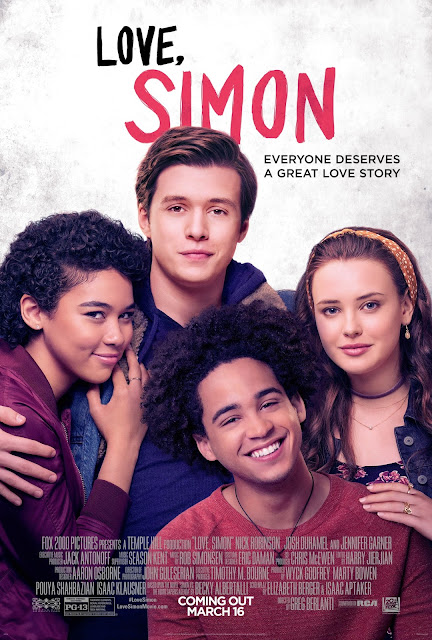 Representation matters. It matters for every minority &/or marginalized community in the world. We are making big strides in representation. Wonder Woman gave young girls a female superhero role model to look up to. A Fantastic Woman gave trans people the realistic & respectful depiction they so deserve. And Black Panther gave people of African descent a long-awaited superhero.

Love, Simon is a pivotal landmark for representation of LGBTQ+ people, especially LGBTQ+ teenagers. While providing an opportunity for LGBTQ+ teenagers to see themselves faithfully represented on screen, it is also an absolutely perfect film. Based on the 2015 novel Simon vs. the Homo Sapiens Agenda by Becky Albertalli, the film follows Simon Spier (played by Nick Robinson), a high school senior in the Atlanta suburbs. He lives with his mother, Emily (played by Jennifer Garner), a therapist; his father, Jack (played by Josh Duhamel); & his younger sister, Nora (played by Talitha Bateman), an aspiring chef.

One day, Leah tells Simon that she saw someone anonymously post on the school's rumor blog that they were in the closet, calling themselves "Blue." Simon starts an email correspondence with Blue, giving himself the pseudonym "Jacques," from the French phrase for Simon Says, "Jacques a dit." Simon & Blue soon form a real connection. However, classmate Martin Addison (played by Logan Miller) screenshots the emails after Simon left the library computer without signing out of his Gmail account. Martin uses the emails to blackmail Simon to get him with Abby. Simon must now juggle trying to find out who Blue is, stop Martin from leaking the emails, & coming to terms with his sexuality. And it's also senior year, so that's hard enough.

The cast is fantastic. Nick Robinson is absolutely amazing here. He can show so many emotions with the look of his face, & portrays the life of a gay teenager trying to reveal who he really is so beautifully. Katherine Langford, Jorge Lendeborg Jr., & Alexandra Shipp also provide great support to Nick Robinson. Josh Duhamel gives one of his best performances in years. And Jennifer Garner gives her greatest performance yet. There's one scene between her & Nick Robinson that will definitely be my favorite scene of the year that has earned positive comparisons to Michael Stuhlbarg's amazing monologue to Timothée Chalamet in 2017's Call Me by Your Name. The scene here is just as amazing & beautiful as the one in Call Me by Your Name, & one of the main reasons for that is because of Garner's performance.

Greg Berlanti's direction is excellent. Berlanti directs the film with a perfect subtlety, allowing for a great amount of heart, & a non-exploitative portrayal of LGBTQ+ teenagers, which is nothing short of groundbreaking.

The screenplay by Elizabeth Berger & Isaac Aptaker is amazing. Berger & Aptaker, known for writing several episodes of the award-winning TV show This Is Us, wrote a faithful adaptation to Becky Albertalli's novel, & realistically depict the comings & goings of a gay teenager. Also, it subverts many of the romantic comedy tropes, & is also wildly funny at many moments.

Rob Simonsen's score is stellar. Simonsen's ambient score is driven by a piano & synths, & has the feel of a Brian Eno album. This will definitely still be one of my favorite scores at the end of the year.

And the soundtrack is spectacular. Led by alternative rock music from the 2010s, this is a soundtrack that has perfectly matched my music taste.

This is the best film of the year, & one of my all-time favorite films. It has some amazing performances, perfectly subdued direction, & a beautiful screenplay, & is a milestone for representation of the LGBTQ+ community.

Love, Simon was seen by me at the MJR Chesterfield Crossing Digital Cinema 16 in Chesterfield Township, MI on Saturday, March 10, 2018. It is in theaters everywhere. Its runtime is 109 minutes, & it is rated PG-13 for thematic elements, sexual references, language & teen partying.
at March 22, 2018