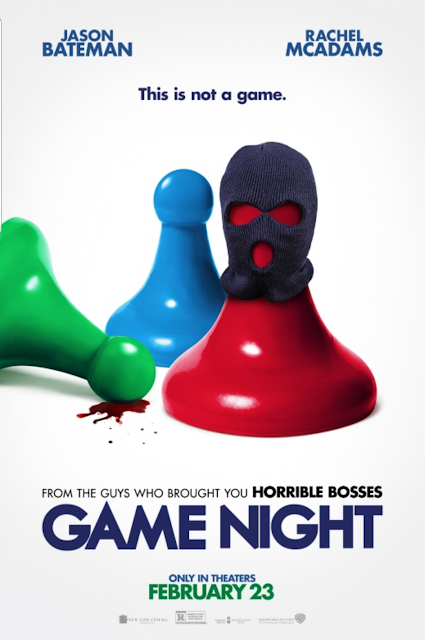 There hasn't been a great dark comedy made by a major studio since 2011's Horrible Bosses. Many attempts at this have failed in recent years, not devoting enough time to plot development & devoting too much time to jokes, which mostly fall flat.

Game Night is the first great, studio-made dark comedy since Horrible Bosses. There's almost a laugh every 30 seconds, & it's extremely well-made. The film follows Max (played by Jason Bateman), an avid gamer. He meets Annie (played by Rachel McAdams) at a bar trivia night, & they eventually get married. They are trying to conceive, but to no avail, probably due to Max's stress & insecurity because of his more handsome & successful brother, Brooks (played by Kyle Chandler), who is arriving in town for a while. Max & Annie have regular game nights at their house, but try to keep it secret from their creepy neighbor, Gary Kingsbury (played by Jesse Plemons), a police officer & ex-wife of a friend of Max & Annie.

After a game night at Max & Annie's house, Brooks invites Max, Annie, & their friends: Ryan (played by Billy Magnussen); Kevin (played by Lamorne Morris); & Michelle (played by Kylie Bunbury). At the game night, Ryan brings his date, Sarah (played by Sharon Horgan) along. Brooks's game night plan is a murder mystery, & they must all find clues to solve it. Brooks hires an actor playing an FBI Agent (played by Jeffrey Wright) to inform them how the mystery goes, but two goons break in, knock the FBI Agent unconscious, & kidnap Brooks, while everyone else is oblivious, believing this is part of the game.

Eventually, they come to realize that this is not a game, & the group of friends get themselves into some dirty situations, leading to a man known as The Bulgarian (played by Michael C. Hall).

The cast is spectacular. Bateman & McAdams are hilarious, & Chandler shows he can be funny as well as being dramatic. But Plemons is the real star here. He is so creepy, so awkward, & so deadpan. He is the "Kevin Kline in A Fish Called Wanda" of this film. He's a true scene-stealer.

The direction by John Francis Daley & Jonathan Goldstein is excellent. Daley & Goldstein, known for writing Horrible Bosses, bring more of the darkly comedic flair from that film & bring it to new heights here.

Mark Perez's screenplay is brilliant. The plot is intricate, the story is intriguing, & the dialogue is absolutely hilarious. It has more humor that lands than most comedies in the past few years.

Barry Peterson's cinematography is stellar. There are a lot of excellent wide shots (that brilliantly use game pieces to represent the characters & their surroundings), & there is one excellent long-take sequence that is one of the best in recent memory.

And Cliff Martinez's score is outstanding. Martinez, known for his scores from Traffic & Drive, once again composes an excellent synth-driven score.

Game Night was seen by me at the MJR Marketplace Digital Cinema 20 in Sterling Heights, MI on Friday, February 23, 2018. It is in theaters everywhere. Its runtime is 100 minutes, & it is rated R for language, sexual references & some violence.
at March 14, 2018