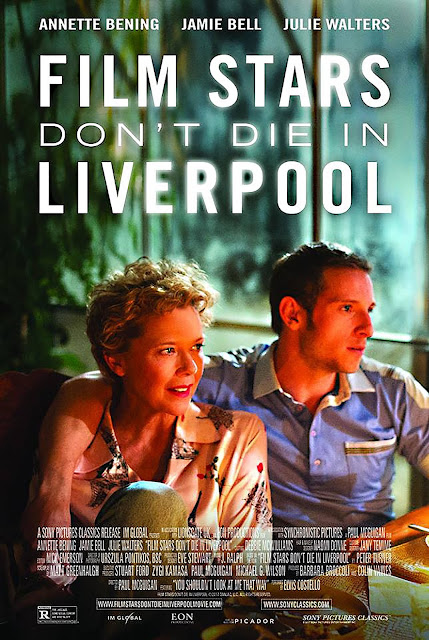 Gloria Grahame, while not the most well-known of actresses during the Golden Age of Hollywood, was one of the better of them. An Oscar winner for 1952's The Bad & the Beautiful, Grahame was a rising star in Hollywood, before plastic surgery & an alienating persona on set caused her film career to quickly wane.

Film Stars Don't Die in Liverpool follows the true story of the last days of Gloria Grahame's life before her death from breast cancer & peritonitis in 1981. Based on the 1986 memoir of the same name by Peter Turner, & set from 1979-1981, the film follows Gloria Grahame (played by Annette Bening), the long-faded actress now renting a room in a boarding house in Liverpool, England. There, she meets Peter Turner (played by Jamie Bell), a 27-year-old struggling actor. They quickly develop a friendship, & eventually a courtship.

Peter eventually introduces Gloria to his parents, Bella (played by Julie Walters) & Joe (played by Kenneth Cranham), who are big fans of Gloria. Gloria also introduces Peter to her family, but there is some tension on that side of the family. As Gloria & Peter become closer, the tension rises between the two.

Two years later, in 1981, Gloria collapses in her dressing room before a performance of The Glass Menagerie. She is quickly dying from a reoccurrence of breast cancer. Gloria decides to recuperate at Peter's home with his parents. Together, Peter & his family try to look after Gloria in her last days.

The cast is spectacular. Annette Bening is absolutely phenomenal. Bening, unlike some actresses, embraces her aging & takes those few-&-far-between great roles for older women. She is way overdue for an Oscar (& she should've been nominated for one & won one for her performance in 2016's 20th Century Women), & this performance here solidified that fact that she needs an Oscar. Bell & Walters also provide great supporting performances, but this film belongs to Bening.

Paul McGuigan's direction is excellent. McGuigan, mostly known for directing mediocre action films such as Push & Victor Frankenstein, has finally struck gold here & shown that he can direct. His direction never misses a beat & keeps the film warm-hearted throughout.

This is one of the best & most overlooked films of the year. It has some great direction & amazing screenwriting, but this film would not be where it is without Annette Bening's tremendous performance.

Film Stars Don't Die in Liverpool was seen by me at the AMC Forum 30 in Sterling Heights, MI on Friday, February 23, 2018. It is no longer in theaters in the Detroit area. Its runtime is 105 minutes, & it is rated R for language, some sexual content & brief nudity.
at March 14, 2018