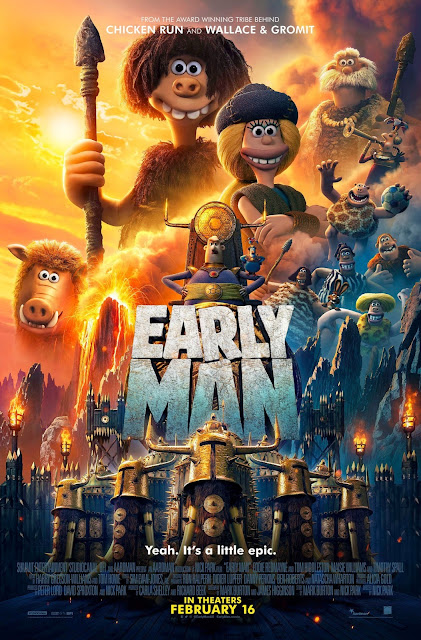 
When I was a kid, one of my favorite films was the animated film Chicken Run. The excellent humor, coupled with the fantastic animation by the team at Aardman, made it a favorite of mine.

After a few years, I have returned to the films of Aardman with Early Man, a slightly flawed but overall great animated film. Set in the Stone Age, the film follows Dug (voiced by Eddie Redmayne), a young caveman living in a valley created by the meteor that hit years before. He is more ambitious than the other people in his tribe, wanting to go hunt something bigger than rabbits, namely woolly mammoths. However, the chief of the tribe, Bobnar (voiced by Timothy Spall), is against it.

One day, an army led by Lord Nooth (voiced by Tom Hiddleston) barges into the valley, driving the tribe into the volcanic lands outside of the valley. Lord Nooth announces the death of the Stone Age & the birth of the Bronze Age. Dug, in an attempt to attack them, ends up falling into their cart & is led to the city. In the city, in an attempt to escape, Dug is mistaken for a soccer player & is sent on to the field for a match.

After being discovered, Dug challenges Nooth's team to a match for the valley. Nooth brushes him off at first, but agrees to the match when he realizes how much he can profit off of the supposed win.

In order to this, Dug needs a lot of help, which comes in the form of Goona (voiced by Maisie Williams), a young Bronze Age girl who loves soccer, but is upset at Nooth's team's exclusion of women. With the help of Goona & the tribe, they might just pull off an upset for the ages, both Stone & Bronze.

The voice cast is excellent. Eddie Redmayne actually makes me like him for once, with his voice talents paying off more than some of his live-action performances. Tom Hiddleston, Maisie Williams & Timothy Spall are great as well.

Nick Park's direction is good. His work isn't as steady as it was on Chicken Run, as it doesn't have as much panache as his older films, but it's still good enough to outweigh the flaws.

The screenplay by Mark Burton, James Higginson & Nick Park is amazing. Just like all of the other Aardman films, there is a lot of offbeat humor that fires out a lot of laughs.

And the animation is stellar. The stop-motion animation that Aardman is known for is still top-notch, & has been since their inception.

This is a great animated film. Although it isn't elite, it still gets a lot right for it to be better than most non-Disney & non-Pixar animated films.

Early Man was seen by me at the MJR Marketplace Digital Cinema 20 in Sterling Heights, MI on Saturday, February 17, 2018. It is in theaters everywhere. Its runtime is 89 minutes, & it is rated PG for rude humor & some action.
at March 07, 2018