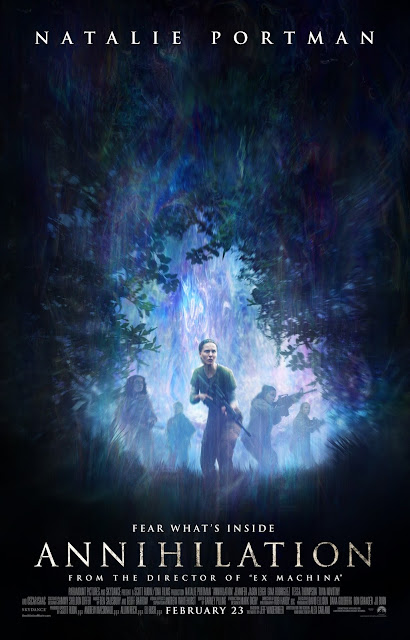 
We've had some truly great brainy sci-fi films as of late. Interstellar, Ex Machina, Arrival & Blade Runner 2049 are prime examples of those sci-fi films that have so much thinking in them then have something that leaves you with your jaw wide open.

Annihilation is another example of those films. This is a film that took me a lot of time to wrap my head around, but I definitely know I loved it. Based on the 2014 novel of the same name by Jeff VanderMeer, the film follows Lena Byers (played by Natalie Portman), a former soldier in the U.S. Army & current cellular biology professor at a university. She is still grief-stricken over the disappearance of her husband, Kane (played by Oscar Isaac), a soldier in the Army Special Forces.

One day, Kane returns, but his memory is very foggy & he is very ill. Not long after, Lena & Kane are taken to Area X, a secret government facility in an unknown location in the South (from the maps shown in the movie, it seems to be Louisiana). At the facility, Lena meets Dr. Ventress (played by Jennifer Jason Leigh), who tells her that Kane went into the shimmer with a team & was the only one who survived. The shimmer was formed by an outer-space object collision & is slowly expanding. Ventress recruits her for the next mission, along with physicist Josie Radeck (played by Tessa Thompson), geomorphologist Cass Shepherd (played by Tuva Novotny), & paramedic Anya Thorensen (played by Gina Rodriguez).

The 5 enter the shimmer, with any type of communication & navigation technology failing. They make many discoveries involving what goes on inside the shimmer. But as they get further into the shimmer, the more startling their discoveries get.

The cast is excellent. Portman kills it once again. The supporting cast of women, namely Thompson & Rodriguez, are also excellent.

Rob Hardy's cinematography is stunning. The visuals are colorful, especially in the shimmer, & there is an abundance of amazing shots in the shimmer.

Barney Pilling's editing is excellent. Pilling allows the story to slowly unfold, & this is reflected in the methodically slow pacing.

Mark Digby's production design is stellar. The shimmer is so immersive, & the various plants & architecture of the shimmer are stunning.

The sound design is incredible. Some events that occur in the shimmer allow for some absolutely mind-blowing sounds that really stick with you.

The visual effects are impeccable. The wall of the shimmer & the events inside the shimmer allow for some excellent effects.

And the score by Geoff Barrow & Ben Salisbury is excellent. Led by ambient noises, the score really enhances the tense & sometimes scary atmosphere.

Annihilation was seen by me at the MJR Marketplace Digital Cinema 20 in Sterling Heights, MI on Thursday, February 22, 2018. It is in theaters everywhere. Its runtime is 115 minutes, & it is rated R for violence, bloody images, language & some sexuality.
at March 12, 2018