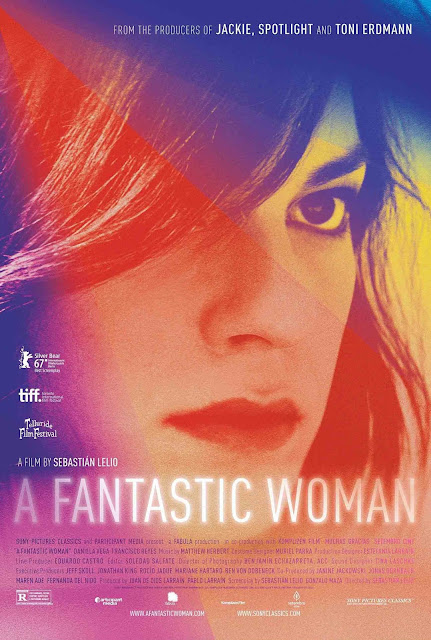 For many years, the portrayal of transgender characters in film has been less than satisfactory, to say the least. Some are more respectful, while some are downright offensive, but none of them have hit the mark, as many films do not have actual transgender actors or actresses portraying the roles. Some may say it's all about talent, but there are some talented transgender actors & actresses out there.

A Fantastic Woman treats the film's subject with such care & tenderness, & is one of the most beautiful films of 2017. The film follows Marina Vidal (played by Daniela Vega), a singer & waitress in Santiago, Chile. She has just moved in with her older boyfriend, Orlando (played by Francisco Reyes), a divorcée.

One night, after going out for Marina's birthday, Orlando wakes up in the middle of the night with a brain aneurysm. Marina takes him to the hospital, but he dies from his aneurysm.

After his death, Marina is brutally victimized. She is victimized because she is a trans woman. A police officer purposefully calls her by her old name. An investigator from the sexual assault unit oversees a traumatic inspection of her. And Orlando's family shuts her out, banning her from coming to Orlando's funeral.

The cast is fantastic. Daniela Vega's performance is a complete revelation. She can show so much emotion with just the look on her face. This performance shows that transgender actors & actresses are out there, & that they need to be faithfully represented. And Francisco Reyes also has some excellent chemistry with Daniela Vega. But this belongs to Vega's fantastic performance.

And the screenplay by Sebastián Lelio & Gonzalo Maza is amazing. The dialogue feels natural, & the plot & story are so intriguing, & give the lead transgender character the respect she deserves.

This is one of the best foreign films of the decade. Led by a fantastic performance from Daniela Vega, this beautiful film finally gives trans people the representation they deserve. Hopefully, this film will lead the way for more trans actors & actresses to play roles meant for trans people in film, & lead to wider acceptance of trans people throughout the world.