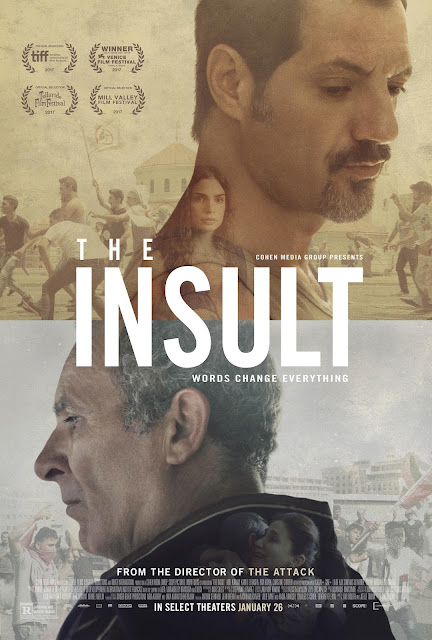 
The power struggle in the Middle East between Israel, Lebanon & Palestine has been occurring since time immemorial. All 3 countries have fought over land & religion for centuries, & the fighting will definitely not end anytime soon.

The Insult excellently details the major consequences of a seemingly inconsequential event. The film follows Tony Hanna (played by Adel Karam), a Lebanese Christian garage owner in Beirut. He lives with his pregnant wife, Shirine (played by Rita Hayek). While working in his garage, he has inflammatory speeches from former President-elect & pro-Christian, anti-Palestine militia leader Bachir Gemayel playing in the background.

One morning, Yasser Salameh (played by Kamel El Basha), a Palestinian refugee, comes into the neighborhood with his construction crew. Yasser lives with his wife, Manal (played by Christine Choueiri), in a refugee camp, & his legal status is uncertain. Yasser's crew tries to fix Tony's broken pipe; however, Tony refuses to have his pipe fixed, even though it is against code as it is. Angered by this, Yasser insults Tony.

After this, Tony is angered, demanding an apology from Yasser. When Yasser comes to apologize, he notices Gemayel's speech playing in the background. Offended, Yasser refuses to apologize. However, Tony says a monumentally offensive remark to Yasser, leading to Yasser punching Tony.

This eventually leads to a court dispute between the two. However, it is taken to the highest court in Lebanon. But the court case opens up many old wounds, causing national confrontations & exposing repressed memories of the Lebanese Civil War.

The cast is excellent. Karam & El Basha (who won the Volpi Cup for Best Actor at last year's Venice Film Festival) play off of each other so well, with both performances being so human & so tense.

Ziad Doueiri's direction is amazing. Doueiri, a former camera operator for Quentin Tarantino, keeps the atmosphere so tense & claustrophobic that you can't escape.

The screenplay by Ziad Doueiri & Joelle Touma is brilliant. The dialogue is very realistic, & the plot is so intricate, starting off as one thing & ending up delving more & more than into unlikely & twisty territory than we could have ever thought.

And Tommaso Fiorilli's cinematography is excellent. Fiorilli excellently captures the grimy, intense atmosphere along with the brutal chaos.

This is one of the best foreign films I've seen in a while. This is a well-acted & well-directed film that is more than worthy of its Oscar nomination for Best Foreign Language Film.