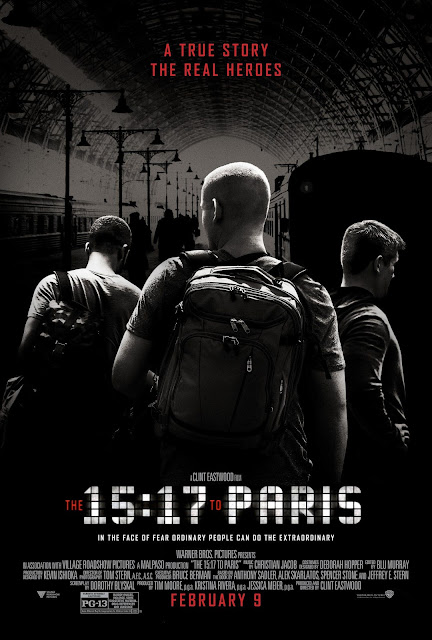 Almost every great director has made a dud in their careers. Woody Allen had Scoop, Steven Spielberg had 1941, Francis Ford Coppola had Jack, Ridley Scott had A Good Year, David Lynch had Dune, & the Coen Brothers had The Ladykillers. Only a few directors are completely unscathed so far, namely Paul Thomas Anderson, Quentin Tarantino, Richard Linklater, Martin Scorsese, Denis Villeneuve & Wes Anderson.

Anthony, Alek & Spencer meet at a Christian high school & keep in contact with each other through the years. Alek joins the Army, while Spencer joins the Air Force. During their next leaves, Alek & Spencer meet up with Anthony in Europe, wanting to travel throughout the continent. After traveling through Germany & Amsterdam, they decide to go to Paris to finish off the trip. But a terrorist is planning to attack the train, & they miraculously stop it.

The cast is dreadful. Sadler, Skarlatos & Stone are horrendous as themselves. But Greer & Fischer are even worse. They are completely out of place here. They can do drama, but not here.

Clint Eastwood's direction is awful. Eastwood cannot manage to keep the film interesting at all. The film is completely boring, & Eastwood is seemingly unable to do anything about it.

Dorothy Blyskal's screenplay is a disaster. Blyskal has managed to overwrite, writing too much to fill the runtime. Also, the dialogue is nothing short of cringe-worthy.

Tom Stern's cinematography is terrible. Stern uses the shaky camera technique throughout the entire film, even when it is not necessary, which gave me a headache.

And Blu Murray's editing is horrible. The film has many scenes that do not belong in the film, & it's a crime that they were not left on the cutting room floor. Also, the film is horribly paced, as the film drags on & on, making the film's 94-minute runtime feel like 3 hours.

This is by far the worst film of the year so far, & one of the worst films I've ever seen. The film has horrible acting, direction, writing & technical elements, & the incident (which lasted only 2 minutes in real-life as well as in the film) does not have enough in it to warrant being a feature-length film. It would've worked a lot better as a documentary. If this still isn't the worst film of 2018 at the end of the year, then there must be something horrendous coming our way.

The 15:17 to Paris was seen by me at the MJR Marketplace Digital Cinema 20 in Sterling Heights, MI on Saturday, February 10, 2018. It is in theaters everywhere. Its runtime is 94 minutes, & it is rated PG-13 for bloody images, violence, some suggestive material, drug references & language.
at February 28, 2018