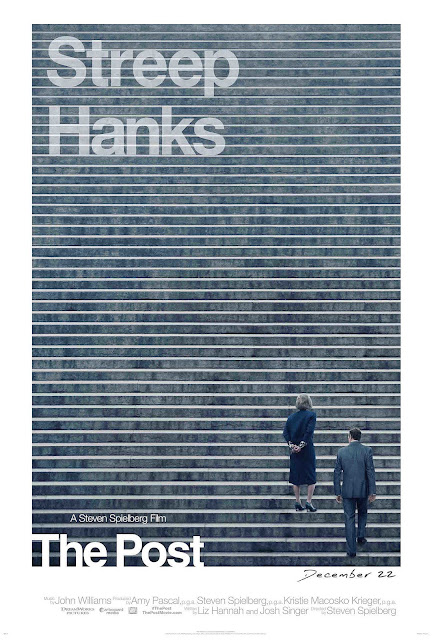 
Right now, in America, the press is being unfairly attacked for merely presenting the truth. In an era of instability in our country, the corridors of power attack the press that get all of the facts, calling them "alternative facts" & "fake news." But the press has, is, & will always be for the people, & will always seek the truth no matter the costs.

The Post is a truly amazing film that is so timely that it is one of the few films that this country truly needs right now. Set in 1971, the film follows Katherine Graham (played by Meryl Streep), the new owner & publisher of The Washington Post. Her husband's recent suicide has thrust her into the leadership of the newspaper, as the newspaper releases its IPO. She feels that she is constantly superceded by the men below her, namely Arthur Parsons (played by Bradley Whitford).

Meanwhile, Post editor Ben Bradlee (played by Tom Hanks) notices New York Times reporter Neil Sheehan (played by Justin Swain) has essentially disappeared, as he hasn't wrote anything for the Times recently. Bradlee deduces that Sheehan's working on a big story, so he tries to catch up with them. While this occurs, Secretary of Defense Robert McNamara (played by Bruce Greenwood), who happens to be a close friend of Graham's, warns her of an unflattering story that will be presented by the Times about him.

The unflattering story is a story on the Pentagon Papers, a series of documents leaked by former military analyst Daniel Ellsberg (played by Matthew Rhys) revealing the government's deception of the public about their interests in Vietnam since the Truman administration. The Times, however, was prevented by a court order from publishing the documents.

Ben Bagdikian (played by Bob Odenkirk), the second-in-command to Bradlee, tracks Ellsberg down & receives copies of the papers sent to the Times from him. Many Post reporters, including Bagdikian, Meg Greenfield (played by Carrie Coon), & Ben's wife, Tony (played by Sarah Paulson), try to sort the papers together.

Once the Post's lawyers hear of this, they tell them to stop due to possible criminal charges, but they refuse to stop. Graham, Bradlee, McNamara & Post chairman Fritz Beebe (played by Tracy Letts) debate whether or not to publish the material, asking the question if whether or not publishing the truth about government deception is worth risking a legendary newspaper.

Steven Spielberg's direction is excellent. Spielberg, one of the greatest directors of all time, has directed his best film of the decade. He keeps the thrills going, building up a tense atmosphere to an extreme boiling point.

The editing by Michael Kahn & Sarah Broshar is excellent. Kahn, Spielberg's editor since Close Encounters of the Third Kind, & Broshar, Spielberg's former assistant editor since The Adventures of Tintin, keep the film marching along at a brisk pace, heightening the tension even more.

Rick Carter's production design is spectacular. From the extravagantly large houses of Graham & Bradlee to the offices of the Post, Carter's sets immerse us at every turn.

And John Williams's score is phenomenal. Williams, one of the greatest composers of all time, has composed one of his best scores, driven by an astounding orchestra.

This is one of the year's best films. Spielberg, Williams, Streep & Hanks fire on all cylinders, creating a film that is eerily relevant to our current political climate, & is also deserving of its Academy Award nomination for Best Picture that was announced today.