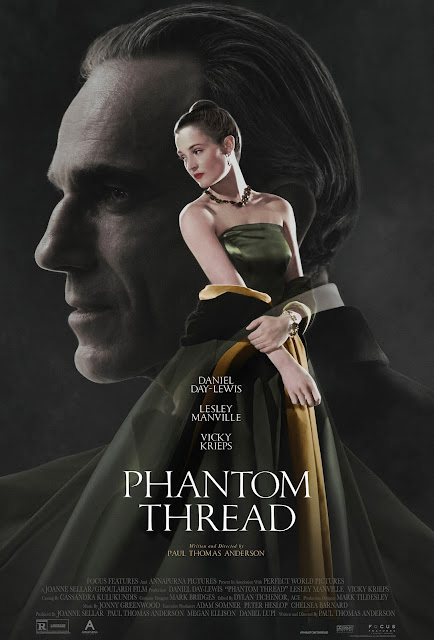 When you see a film directed by Paul Thomas Anderson, it isn't like seeing any other film. It is an experience of filmmaking at its finest. All of his films are masterclasses in filmmaking, & all 7 of his films are in my list of top 100 favorite films, with 5 of them in my top 50. In my opinion, Paul Thomas Anderson is the greatest director of all time.

Phantom Thread is absolute proof of that statement above. It is, all at once, an exquisite romance, a tense Hitchcokian thriller, & a scathingly funny screwball comedy. Set in 1950s London, the film follows Reynolds Woodcock (played by Daniel Day-Lewis), a world-renowned fashion designer. He designs for royals, celebrities, & other members of high society. He is noted for sewing messages into the lining of his dresses. While he is a master at his art, he is also obsessive & overbearing, haunted by his mother's death. However, his sister, Cyril (played by Lesley Manville), whom he affectionately refers to as his "old so-&-so," keeps him in check as she manages the House of Woodcock. Together, they have created an elegant line of luxurious fashion.

One day, Reynolds decides to venture out to his place in the countryside, where Cyril will meet up with him later that night. On his way there, he decides to stop at a restaurant for breakfast. There, he encounters a waitress, Alma Elson (played by Vicky Krieps), a young woman whom he asks out on a date, to which she accepts.

Eventually, Reynolds & Alma's relationship grows, & Alma becomes his muse, assistant, & lover. But the honeymoon period soon ends, as they start to fight constantly, as Reynolds feels his life is bursting at the seams, possibly ruining his career, & Alma tries to convince him that his overbearing ways need to end. But when Alma tries to gain some power in the relationship, everything is irrevocably changed.

Lesley Manville is also fantastic. Manville, known for her many appearances in films directed by Mike Leigh, is nothing short of exemplary. She is just as fierce & commanding as Day-Lewis, & is extremely deserving of her Best Supporting Actress Oscar nomination.

And Vicky Krieps is a revelation. Krieps, a relative unknown from Luxembourg, has given the best breakout lead performance of 2017. Like Day-Lewis & Manville, she is fierce & commanding.

Paul Thomas Anderson's direction is spectacular. Anderson, who has directed masterpieces such as Boogie Nights, Magnolia, There Will Be Blood, & Inherent Vice, has directed one of his 3 best films yet. As with his other films, Anderson has created an absolutely phenomenal landscape for his characters & his locations.

Paul Thomas Anderson's screenplay is brilliant. Anderson is just as great of a screenwriter as he is as a director, writing such phenomenal characters & such amazing dialogue. That trend continues here, as his characters are some of the most well-written I've seen in a while, & the dialogue is also a true work of brilliance. Along with some tense dialogue, there is a lot of scathingly funny dialogue here that lightens the tension just a bit, & that made me laugh as much as only a few other films have recently.

Dylan Tichenor's editing is excellent. Tichenor, Anderson's editor for most of his films, uses a slow pace to let the intricacies of the film slowly unfold, only revealing them so slightly.

Mark Bridges's costume design is perfect. Bridges, who has been the costume designer for all of Anderson's films, has designed costumes that are so extravagant, period-accurate & are reminiscent of haute couture. This better win the Oscar for Best Costume Design.

The makeup & hairstyling is astounding. It is just as extravagant & period-accurate as the costume design & production design.

And Jonny Greenwood's score is beautiful. Greenwood, the lead guitarist for Radiohead & Anderson's composer since There Will Be Blood, uses a piano & violin to drive the score, & it is haunting & tense.

This is one of the 3 best films of the year, & is an absolute masterpiece that is well-deserving of its Best Picture nomination. It has excellent direction & brilliant writing from Paul Thomas Anderson, amazing technical elements, & above all, a phenomenal send-off for Daniel Day-Lewis. We'll certainly miss him on the silver screen, & we wish him good luck in retirement.

Phantom Thread was seen by me at the Maple Theater in Bloomfield Township, MI on Sunday, January 14, 2018. It is in theaters everywhere. Its runtime is 130 minutes, & it is rated R for language.
at January 23, 2018