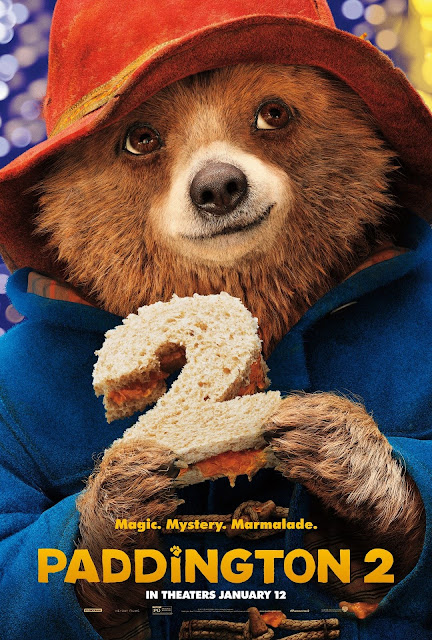 
Most live-action PG-rated kids films are awful these days. They rely on cliched plotlines & awful jokes without a lot of heart to them. Thankfully, every once in a while, we get a film that is so endearing & adorable with some great humor.

Paddington 2, much like the first film, has all of those positive qualities that live-action kids films should have. The film follows Paddington Brown (voiced by Ben Whishaw), who is now settled in with the Browns in the neighborhood of Windsor Gardens in London. He has charmed the hearts of everyone in the neighborhood, helping them out with their problems.

For his Aunt Lucy's (voiced by Imelda Staunton) 100th birthday, Paddington struggles to find a gift, until he visits the antique shop owned by his friend, Samuel Gruber (played by Jim Broadbent), where he notices a rare pop-up book of London. However, the book is expensive, so Paddington gets various jobs to purchase it. However, one night, the antique shop is broken into by a thief that steals the book. Although Paddington saw the thief, & although Gruber is adamant that Paddington was innocent, the police do not believe his story, & Paddington is sentenced to prison, much to the happiness of the Browns' neighbor, Mr. Curry (played by Peter Capaldi), the curmudgeonly self-appointed officer of the neighborhood. The thief turns out to be none other than Phoenix Buchanan (played by Hugh Grant), the Browns' new neighbor, a once-respected actor who is now stuck doing dog food commercials.

The cast is amazing. Whishaw is charming in his voice role. Bonneville & Hawkins are great. Gleeson is absolutely fantastic. And Grant is one of the most delightful villains in recent memory.

Paul King's direction is great. King directs the film with subdued precision, & maintains an absolutely kind-hearted aura throughout the film.

And the screenplay by Paul King & Simon Barnaby is excellent. The plot is excellent, the characters are fantastic, & the message is both timely & heartwarming.

This is one of the better kids films in the past few years. It's adorable, charming, & even better than the original Paddington. I know one thing: I can't wait for Paddington 3!

Paddington 2 was seen by me at the MJR Marketplace Digital Cinema 20 in Sterling Heights, MI on Saturday, January 20, 2018. It is in theaters everywhere. Its runtime is 104 minutes, & it is rated PG for some action & mild rude humor.
at January 24, 2018