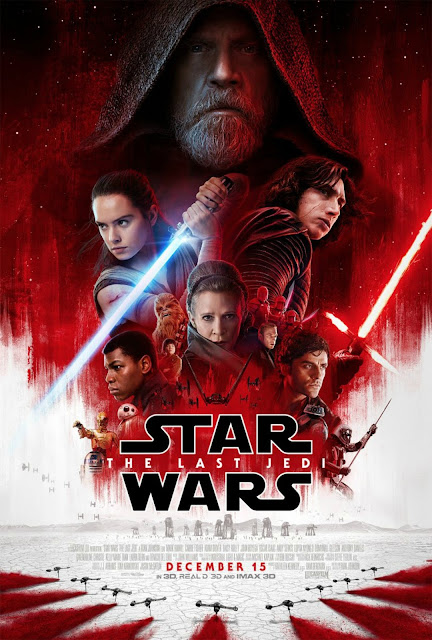 I'm just going to get something off of my chest here: I've never been an entirely huge Star Wars fan. I've liked the films (except for 2 of the prequels), but I've never delved deep into the whole saga. I'd only watched all of the films for the first time only before 2015's Star Wars: The Force Awakens, which I thoroughly enjoyed. 2016's Rogue One: A Star Wars Story, while not as great as any of the original Star Wars films or The Force Awakens, was another Star Wars film that I really enjoyed.

But something different happened with Star Wars: The Last Jedi. From the first trailer, I knew that I would really love this film. The second trailer further assured this assumption. And when I walked in the theater to see this film, I felt more anticipation than any other Star Wars film that I've seen.

And it did not disappoint one bit. In fact, it exceeded my expectations. It's fun & extremely well-made. The film once again follows Rey (played by Daisy Ridley), who, along with Chewbacca (played by Joonas Suotamo) & R2-D2 (played by Jimmy Vee) has just found Luke Skywalker (played by Mark Hamill) on the remote planet of Ahch-To. Rey is trying to recruit him for the Resistance, led by General Leia Organa (played by Carrie Fisher). However, Luke declines, still feeling immense guilt over his past involving Kylo Ren (played by Adam Driver), whom he says was corrupted by Supreme Leader Snoke (played by Andy Serkis). However, after some thought, he decides to teach Rey to use the Force.

The four are led to the planet of Canto Bight, where they meet DJ (played by Benicio del Toro), a servicable codebreaker, who joins them to help destroy the tracking device. But they reach some trouble when they run into Captain Phasma (played by Gwendoline Christie) & are betrayed.

Also, Rey discovers more into what happened with Kylo's defection to the First Order, & finds out things are not as they seem.

The cast is superb. Ridley is phenomenal, & has definitely proved she can act as well as she uses the Force. Isaac, Boyega, Driver & Hamill are also great. Fisher is excellent in her final performance. But the standout is Kelly Marie Tran, who lights up the screen every time we see her.

Rian Johnson's direction is excellent. He further expands the world of Star Wars, & takes a lot of risks that I haven't seen in any Star Wars films that pay off really well.

Rian Johnson's screenplay is amazing. He makes sure all the characters are fully developed, & he adds a lot of humor to the film, which livens up the film even more.

Rick Heinrichs's production design is phenomenal. The sets, especially the sets of the ships & the planets, are so immersive.

Michael Kaplan's costume design is amazing. The costumes fit perfectly with the sci-fi fantasy themes of the film, with the costumes looking very futuristic & awesome.

The sound design is incredible. Every sound is loud & jarring, & complete immerses the audience. Also, one instance of absolute silence works so perfectly.

John Williams's original score is impeccable. Williams, who is definitely one of the best composers in history, has composed a score that ranks among his best, with his orchestra pulsating throughout the film.

And the visual effects, as always for a Star Wars film, are stunning. The explosions & ships & planets are created with such amazing CGI that they become their own character.

This is one of the best films of the year, & also, quite possibly, the best Star Wars film I've ever seen. It's fun & action-packed, with some of the best technical achievements in the Star Wars saga. I think you can consider me to be a full-on Star Wars fan now.

Star Wars: The Last Jedi was seen by me at the MJR Marketplace Digital Cinema 20 in Sterling Heights, MI on Saturday, December 16, 2017. It is in theaters everywhere. Its runtime is 152 minutes, & it is rated PG-13 for sequences of sci-fi action & violence.
at December 27, 2017