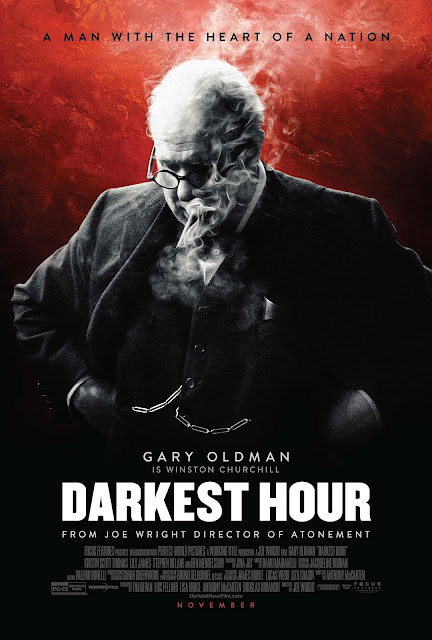 Winston Churchill was arguably the greatest Prime Minister in the history of Great Britain. With his grand speeches & extreme tenacity, he unified the people of Britain in the fight against the Nazi regime in World War II, giving hope to the people & the soldiers. While he was despised by most members of the British House of Commons, including members from his own Conservative party, he managed to become respected at the end of it all.

Darkest Hour is an excellent portrayal of Churchill's turbulent first month in office. Set in 1940, the film follows Winston Churchill (played by Gary Oldman), the Conservative Member of Parliament for the constituency of Epping & the First Lord of the Admiralty. Parliament is at a deadlock: the opposing partiesin Parliament demand that the current Prime Minister, Neville Chamberlain (played by Ronald Pickup), resign due to his policy of appeasement & due to the belief that he is to weak to protect Britain. Chamberlain announces his resignation in a meeting with the Cabinet, naming Viscount Halifax (played by Stephen Dillane) as his successor; however, Halifax declines, despite the full support of him by the Cabinet. Chamberlain then selects Churchill as his successor, believing him to be the only man who can be supported by all parties in Parliament.

Churchill is an interesting man: he's loud, large, & brash. Always at his side is his wife, Clementine (played by Kristin Scott Thomas). Clementime tells Winston that he must warm up in order to win over the population. Also at his side is his new secretary, Elizabeth Layton (played by Lily James), who also types Winston's speeches.

When he is officially named Prime Minister by King George VI (played by Ben Mendelsohn), he is told that he will not be treated with the same respect that he treated Chamberlain, as he considers Churchill to be a bad choice for Prime Minister.

Churchill's first speech in Parliament, calling for a full war against Nazi Germany, without no peace negotiation, is met with disapproval from the Conservatives, forcing Chamberlain & Halifax to consider resigning from the War Cabinet & force Chamberlain out of office. But Operation Dynamo, the operation to evacuate the British soldiers from the beaches of Dunkirk, may save Churchill after all.

The cast is superb. Gary Oldman is phenomenal, & this is definitely the best performance of his career. His performance is an absolute transformation, & his resemblance to Churchill with the makeup is absolutely uncanny. Oldman also gets a lot of Churchill's mannerisms down correctly.

Mendelsohn also does a great job as King George VI, proving himself to be a great actor that is criminally underrated. I personally consider his portrayal of King George VI to be a better portrayal than Colin Firth's Oscar-winning portrayal in 2010's The King's Speech.

Scott Thomas also delivers one of her best performances in a while, probably since her Golden Globe-nominated performance in 2008's I've Loved You So Long. Scott Thomas manages to be a powerful force in her short screen time.

James, Dillane & Pickup are also great in their roles. But this film belongs to Oldman, who we might as well consider him to be the eventual Oscar winner for Best Actor.

Joe Wright's direction is excellent. Wright brings a lot of great panache to the film, livening up the film's to extreme heights.

Bruno Delbonnel's cinematography is phenomenal. Delbonnel uses a series of terrific tracking shots, including one that is one of the best shots I've seen this entire year.

Sarah Greenwood's production design is amazing. Although it doesn't draw attention to itself, it manages to immerse the audience in the film's time period.

Jacqueline Durran's costume design is excellent. The costumes are similar to the ones worn by the elites & the politicians of 1940s Britain.

And Dario Marinelli's score is amazing. The score has such a tense feeling to it, led by the booming orchestral sounds.

This is one of the best films of the year. It is a deeply involving story of a turbulent time in history, led by a truly astounding performance from Gary Oldman.

Darkest Hour was seen by me at The Maple Theater in Bloomfield Hills, MI on Saturday, December 16, 2017. It is in theaters everywhere. Its runtime is 125 minutes, & it is rated PG-13 for some thematic material.
at December 27, 2017