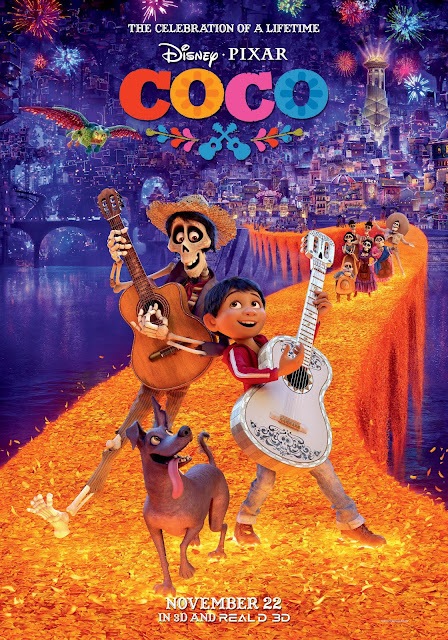 
Most of the Pixar films in the 2010s have ranged from great (Inside Out) to bad (Cars 2). As many great films they've had, they're starting to put out some duds.

Thankfully, Coco is not a dud. It's a spectacular piece of animated perfection. The film follows Miguel Rivera (voiced by Anthony Gonzalez), a 12-year-old boy in a small Mexican village. He lives with his mother, Luisa (voiced by Sofia Espinosa), his father, Enrique (voiced by Jaime Camil), his grandmother, Elena (voiced by Renée Victor), & his great-grandmother, Coco (voiced by Ana Ofelia Murguía). The family has been making shoes for decades. However, Elena follows the strict tradition set by her grandmother, Imelda (voiced by Alanna Ubach), that no music can be played by any family member. This proves problematic for Miguel, as he wants to become a famous musician like Ernesto de la Cruz (voiced by Benjamin Bratt), who was around during Imelda's generation.

During the Day of the Dead, Miguel discovers a picture on the ofrenda with a person with their face cut out holding a guitar like Ernesto de la Cruz's guitar. Deducing that this is the husband that left Imelda, starting the family ban on music, Miguel enters Ernesto's tomb & takes his guitar to use in a talent show. When he strums the guitar, he discovers he is invisible to everyone in the plaza except for his dog, Dante, & his dead relatives, including Imelda. However, since Miguel accidentally broke the picture when he discovered it, Imelda can't cross over to the Land of the Living. Also, Miguel must return to the Land of the Living before sunrise or he will stay in the Land of the Dead forever. In order to return, he must receive a blessing from a dead relative. Imelda blesses him on the condition that Miguel stops playing music; however, he refuses.

On his way to find Ernesto, Miguel meets Héctor (voiced by Gael García Bernal), a skeleton who once played with Ernesto. In return for helping Miguel find Ernesto, Miguel must help Héctor cross over to the Land of the Living & see his daughter, as she is the only person alive who remembers him. But secrets start to rise to the surface, & the familial bonds will be tested.

The voice cast is excellent. Gonzalez & Bratt are great. But Bernal & Ubach are the standouts, with both providing humor & heartache to their character.

Lee Unkrich's direction is excellent. The world he has created & the vision for the world are both so extremely wondrous beyond belief.

The screenplay by Lee Unkrich, Jason Kats, Matthew Aldrich & Adrian Molina is amazing. The characters are so excellently written, & the script has so much respect for Mexican culture.

Michael Giacchino's score is spectacular. The Mexican-style guitar-driven score is so fun to listen to, & is one of Giacchino's best.

This is the best animated film of the year, & one of the best Pixar films of the decade. It's a heartfelt & respectful insight to Mexican culture & the familial ties that bind.

Coco was seen by me at the MJR Marketplace Digital Cinema 20 in Sterling Heights, MI on Friday, December 1, 2017. It is in theaters everywhere. Its runtime is 105 minutes, & it is rated PG for thematic elements.
at December 09, 2017