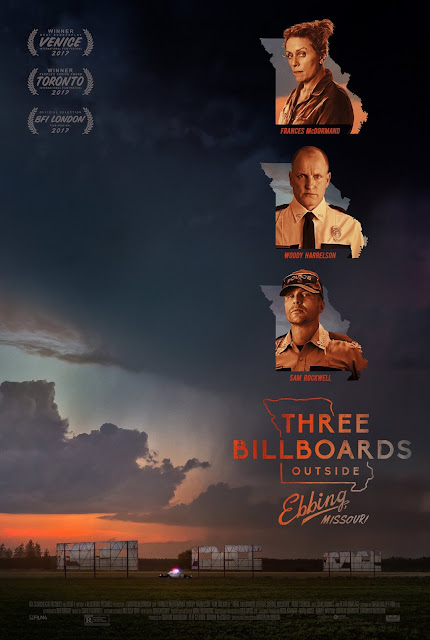 When we suffer the loss of someone close to us, we usually feel 2 emotions: sadness & anger. I'm perfectly sure that we've all felt either emotion after a loss. But how do we deal with those feelings? Do we express our emotions? Do we hold our feelings in? What do we do in this situation? And how do we pull through?

These questions are expressed so beautifully & also hilariously in Three Billboards Outside Ebbing, Missouri, a masterpiece that is both the funniest film of the year & the most emotional film of the year. Set in the small town of Ebbing, Missouri, the film follows Mildred Hayes (played by Frances McDormand), a single divorced mother still reeling from the rape & murder of her daughter, Angela Hayes (played by Kathryn Newton), seven months prior. She is sad about the fact that her daughter is gone, & she is angry over words both said & unsaid, & that no one has been arrested as a suspect in the case. Her son, Robbie Hayes (played by Lucas Hedges) is even more depressed over Angela's death.

Angered with the lack of investigation into the case, Mildred decides to purchase 3 abandoned billboards on a barely-traveled road near where Angela's body was found. The 3 billboards condemn the local police for their lack of progress, sequentially stating: "RAPED WHILE DYING"; "AND STILL NO ARRESTS?"; "HOW COME, CHIEF WILLOUGHBY?" In a news interview, Mildred criticizes the police for their preoccupation of "torturing African-Americans & eating Krispy Kremes" than solving actual crimes, like the murder of Angela.

The police chief, Sheriff Bill Willoughby (played by Woody Harrelson), while sympathetic to Mildred's plight, is upset over what he perceives to be a personal attack. His deputy, the incompetent, deeply bigoted mama's boy, Officer Jason Dixon (played by Sam Rockwell), is even more angered, but because of the perceived disrespect of the police. Dixon's bigotry is definitely from his mother, Mrs. Dixon (played by Sandy Martin). The townsfolk are also angered, not only because of the respect they have for Willoughby, but because the billboards were put up at a time when Willoughby & his wife, Anne (played by Abbie Cornish) are going through personal issues. Mildred's abusive ex-husband, Charlie (played by John Hawkes) is especially angered at Mildred for the billboards, fearing what will happen to their family. Mildred also criticize him for his relationship with 19-year-old Penelope (played by Samara Weaving).

While Willoughby tries to solve his personal issues, Dixon tries at all costs to get Mildred to back down, going so far as attacking Red Welby (played by Caleb Landry Jones), the ad agency owner who sold the billboards to Mildred. But Mildred will not back down, as she is extremely driven to find who killed her daughter. While this occurs, James (played by Peter Dinklage), a mild-mannered car salesman, sets his eyes on Mildred. But as the days go by, the conflict between Mildred & the police only gets more & more hectic, especially when Officer Abercrombie (played by Clarke Peters) comes to Ebbing to work with the police force.

The cast is one of the best I've seen in years. Frances McDormand... wow. Her performance is absolutely legendary, & by far the best in her career, even better than her legendary performance in Fargo. She manages to make you burst out laughing & make you emotional within seconds, with just one line or the look on her face.

Woody Harrelson also gives the best performance of his career. Just like McDormand, he can make you laugh & cry within seconds.

Sam Rockwell's performance is also the best of his career. You will hate his character at first, but he has a dark past that he starts to want to atone for. And Rockwell portrays that inner turmoil so perfectly.

The rest of the cast, from Hawkes, Dinklage, Cornish & Hedges in the bigger roles, to Jones, Peters, Weaving & Martin in the smaller roles, also do amazing jobs in their smaller parts, each making a huge impression on the film through their performances.

Martin McDonagh's direction is stellar. After his 2 prior darkly comedic masterpieces, 2008's In Bruges & 2012's Seven Psychopaths, McDonagh has created his best film yet. McDonagh knows how to mix dark comedy & heartwrenching drama so perfectly.

Martin McDonagh's screenplay is a sheer work of brilliance. McDonagh is a master at writing interesting characters & interesting dialogue. His plot is extremely intricate, & has some twists & turns that you definitely won't see coming. And the monologues McDonagh wrote in the screenplay are absolutely perfect, & are amazing reminders of his early days as a playwright.

Ben Davis's cinematography is amazing. Davis visually captures the feelings & emotions of the townsfolk with such immense perfection.

Jon Gregory's editing is excellent. Gregory keeps the film flowing along at a tender pace, & he makes sure the film knows where it's going.

And Carter Burwell's score is one of his best. The score evokes memories of his previous scores for the films of the Coen brothers, with his use of a piano, guitars, & an orchestra.

This is definitely the best film of the year so far. It features multiple career-best performances & a terrifically funny screenplay, & perfectly mixes black comedy & heartbreaking drama unlike any other film in recent memory.