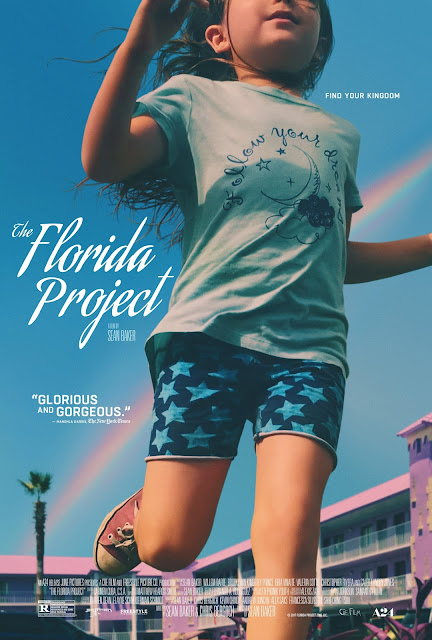 I've always gravitated towards films that show realistic portrayals of people. It's probably because these stories aren't told that often. They're buried under the pile of blockbusters that come out every weekend. However, I've always managed to find the diamond in the rough with these films.

The Florida Project is no exception. The film follows Moonee (played by Brooklynn Kimberly Prince), a 6-year-old living with her mother, Halley (played by Bria Vinaite) at The Magic Castle, an extended stay motel in Kissimmee, Florida, not too far from Disney World. To Moonee, the world is a magic kingdom. She plans to spend the summer playing with her friends, Scooty (played by Christopher Rivera) & Dicky (played by Aiden Malik), including throwing water balloons at tourists, spitting off the balcony, & sneaking around the motel.

Along the way, Moonee meets a new friend, Jancey (played by Valeria Cotto), who lives at the neighboring extended-stay motel, Futureland. Together, the 4 try to make the best of their summer.

But not everything is well. Halley is physically unfit to be a mother. She does drugs, is neglectful towards Moonee, & has gone to some low depths to make some money. This unhappy reality is inching ever so closer to Moonee, but at the end of the day, Halley truly cares for Moonee, as all the things she does is for her. And always in the background is Bobby (played by Willem Dafoe), the manager of The Magic Castle, who besides dealing with maintenance issues & working with his son, Jack (played by Caleb Landry Jones), would do literally anything to protect the kids that live there.

The cast is spectacular. Brooklynn Kimberly Prince & Bria Vinaite are some of the greatest discoveries in cinema in a long time. Prince is an absolute star in the making. Vinaite, who was discovered on Instagram, is absolutely stellar. The rest of the child cast, namely Cotto, is excellent as well. But the best performance comes from Willem Dafoe. Dafoe, one of the most underrated actors of our time, is nothing short of astounding here. His performance, like many others in the film, is so heartwarming & heartbreaking all at once.

The screenplay by Sean Baker & Chris Bergoch is perfect. The plot, characters, & dialogue feel so amazingly raw & real that it hurts.

And Alexis Zabe's cinematography is stellar. Shot on 35mm, Zabe captures the children's vision so perfectly, with every shot looking like a bright & colorful painting. And the last sequence of the film, shot on an iPhone (like Baker's previous film, 2015's Tangerine) is nothing short of perfect.

This is one of the best films of the year. It's an amazing portrayal of childhood. It may not be a great life for everyone, but it's raw & real. And shouldn't we see more realistic depictions of life like this? I sure think we should.