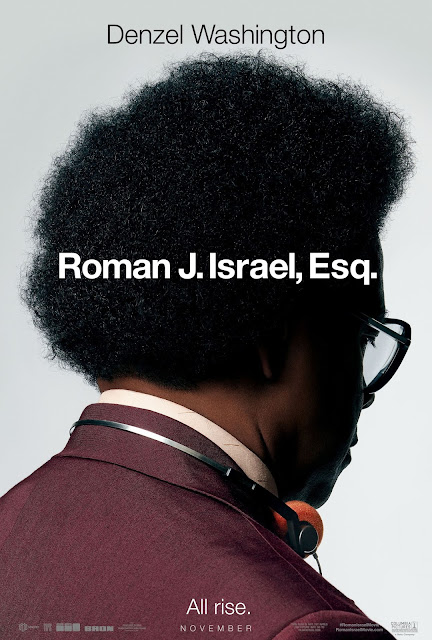 Roman J. Israel, Esq., besides its offensive portrayal of an autistic character (albeit not specifically stated to be on the autism spectrum, but obviously meant to be on the autism spectrum), is a horribly directed, terribly written, & bizarrely edited mess. The film follows Roman J. Israel, Esq. (played by Denzel Washington), a Los Angeles lawyer who has been working behind-the-scenes while his partner has been winning cases. What Roman lacks in social skills, he makes up for with his wealth of legal knowledge. Also, Roman has been working for years on a 1,000 page class-action lawsuit that he says will change the legal system forever.

One day, his partner has a fatal heart attack, thrusting Roman into the front of the firm. Having basically worked for free his whole career, Roman discovers secrets the firm held from him, namely going against Roman's values of helping the marginalized. Also, the firm will be run & then closed down by George Pierce (played by Colin Farrell), a more successful hot-shot lawyer.

Roman also gets himself involved with Maya (played by Carmen Ejogo), a social justice advocate. As Roman starts to work for George, Roman finds himself going against his values. But one decision could ruin everything.

The cast is mediocre. Denzel Washington, who I'm surprised is actually being praised for this role, is terribly one-note & offensive towards people on the autism spectrum. However, Colin Farrell & Carmen Ejogo are both good in their smaller roles.

Dan Gilroy's direction is pitiful. Gilroy can't juggle any of the film's tonal shifts & his atmosphere is extremely muddled. This is very disappointing, as his previous film, Nightcrawler, was excellent.

Dan Gilroy's screenplay is also horrible. The characters are almost caricatures, & the script is terrible, as it tries to make a statement but fails miserably.

And the editing by John Gilroy is awful. The film is poorly paced, it doesn't know where it's going, & some scenes don't fit into the film at all. This is also disappointing, as his editing for Nightcrawler was excellent.

This is one of the 3 worst films of the year. It features a career-worst performance from Denzel Washington, poor direction, bad writing, & horrible editing. One reviewer called this "an unfunny episode of Curb Your Enthusiasm." I completely agree with that person.