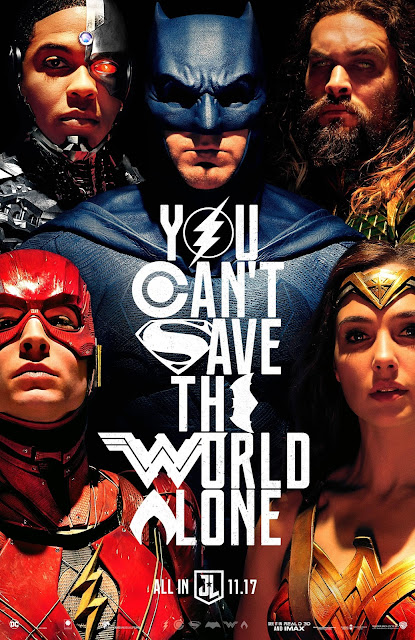 
The DC Extended Universe has been very mediocre so far. Man of Steel was uninspiring, Batman v. Superman: Dawn of Justice was too long & overindulgent, & Suicide Squad was a complete & under mess. However, Wonder Woman was absolutely fantastic, & proved that the DC Extended Universe may have some life in it.

Now, they have finally brought some of our favorite DC heroes together for Justice League, a disappointing superhero film. The film follows Bruce Wayne, AKA Batman (played by Ben Affleck), who is trying to form a group of metahumans to protect the world after the death of Clark Kent, AKA Kal-El, AKA Superman (played by Henry Cavill). When Steppenwolf (played by Ciarán Hinds) & his army of Parademons come to steal the Mother Boxes, including the one from Themyscira, Queen Hippolyta (played by Connie Nielsen) warns her daughter, Diana, AKA Wonder Woman (played by Gal Gadot) of Steppenwolf's return. Diana then joins forces with Bruce to create a team.

With the help of Commissioner James Gordon (played by J.K. Simmons) & Alfred Pennyworth (played by Jeremy Irons), the team gets closer & closer to finding Steppenwolf. But something big occurs, forcing Lois Lane (played by Amy Adams) & Martha Kent (played by Diane Lane) to get involved.

The cast is good. Affleck does a good job as Batman, & so does Henry Cavill as Superman. But Gal Gadot, Ezra Miller, & especially Jason Momoa, are the real standouts here.

Zack Snyder's direction is bad. Although the lighter tone is a nice change of pace, it still doesn't work most of the time.

Chris Terrio & Joss Whedon's screenplay is mediocre. The dialogue is awful, & the characters (especially Steppenwolf) are so badly written.

Danny Elfman's score is great. Elfman, who is one of my favorite film composers, has done a great job here, especially his re-working of the original Batman theme.

And the visual effects are a mixed bag. Some parts of the effects really shine, while others, especially Henry Cavill's mustache removal, are really bad.

This is a unpleasant surprise. While it does have a few shining moments, the bad does sadly outweigh the good. It may be the second-best film in the DC Extended Universe, but that isn't saying much.

Justice League was seen by me at the MJR Marketplace Digital Cinema 20 in Sterling Heights, MI on Tuesday, November 21, 2017. It is in theaters everywhere. Its runtime is 120 minutes, & it is rated PG-13 for sequences of sci-fi violence & action.
at November 28, 2017