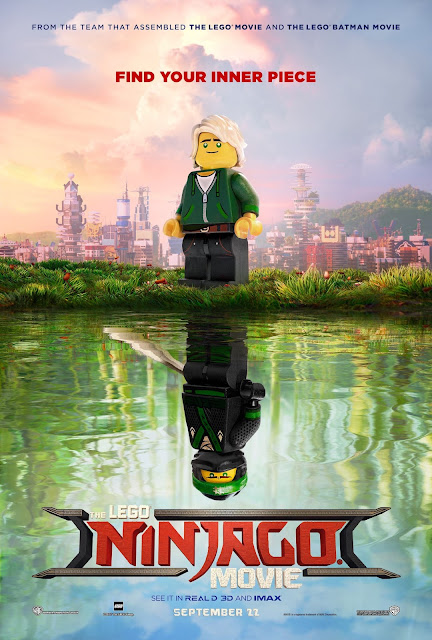 The Lego Ninjago Movie, while not the best of the franchise, still stands on its own as a different & brilliantly funny animated film. The film focuses on Lloyd Garmadon (voiced by Dave Franco), a teenager in the city of Ninjago. He lives with his mother, Koko (voiced by Olivia Munn). Since he is the son of the tyrannical Lord Garmadon (voiced by Justin Theroux), Lloyd is seen as a pariah by the townspeople.

But Lloyd has a secret. He is a ninja, along with Kai (voiced by Michael Peña), Jay (voiced by Kumail Nanjiani), Nya (voiced by Abbi Jacobson), Zane (voiced by Zach Woods), & Cole (voiced by Fred Armisen), who are all under the tutelage of Master Wu (voiced by Jackie Chan).

On Lloyd's birthday, Lord Garmadon happens to attack Ninjago again, & fails, thanks to the work of the ninjas. Lord Garmadon promises to return with a weapons-immune mech. However, when the ninjas return, Master Wu tells them they are not real ninjas, & that they must use powers from within. However, Master Wu mentions an Ultimate Weapon, but the Ultimate Weapon is forbidden to be used.

Now, with the city under attack, Master Wu urges the ninjas to use the Ultimate Ultimate Weapon & stop Lord Garmadon & Meowthra from destroying Ninjago, & Lloyd might actually end up bonding with his father, starting a relationship they never had.

The direction by Charlie Bean, Paul Fisher & Bob Logan is good. Although there are a few rough spots (which I expected since they are all first-time directors), the direction is good enough to overcome those rough spots.

The screenplay by Bob Logan, Paul Fisher, William Wheeler, Tom Wheeler, Jared Stern, John Whittington, Hilary Winston, Dan Hageman & Kevin Hageman is brilliant. It has the quirky & always-hilarious humor that has been part of the first 2 films of the franchise.

The Lego Ninjago Movie was seen by me at the MJR Marketplace Digital Cinema 20 in Sterling Heights, MI on Friday, September 22, 2017. It is in theaters everywhere. Its runtime is 101 minutes, & it is rated PG for some mild action & rude humor.
at October 16, 2017