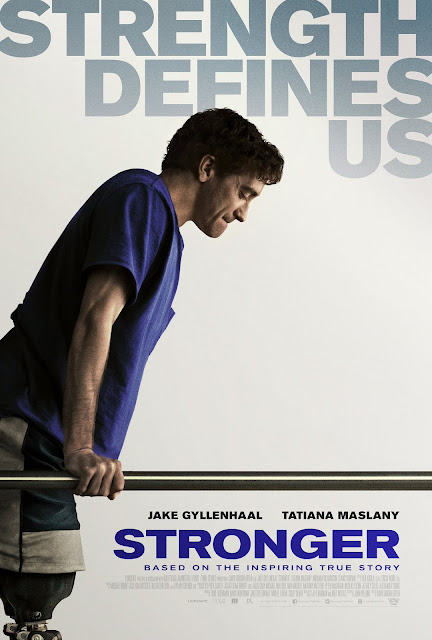 David Gordon Green, that amazing cinematic poet, has always been one of my favorite filmmakers. From his debut film, George Washington, to his magnum opus, All the Real Girls, Green has managed  to create an effortlessly human & poetic atmosphere.

And now, he has brought this human atmosphere to Stronger, a powerful but somewhat cliched film. Based on the memoir of the same name by Jeff Bauman & Bret Witter, & set in 2013, the film follows Jeff Bauman (played by Jake Gyllenhaal), a ne'er-do-well working at a Costco in Boston. He lives with his alcoholic mother, Patty (played by Miranda Richardson) in a small apartment. At the local bar, he runs into his ex-girlfriend, Erin Hurley (played by Tatiana Maslany), whom he still loves, but is unable to commit. He decides to help raise money for Erin, who is running in the Boston Marathon to raise money for her hospital.

On April 15, 2013, the day of the marathon, Jeff struggles to get to the area near the finish line, but he does just before Erin crosses it. Right when she approaches, a bomb goes off, & another one goes off 10 seconds later. After being sent to the hospital, Jeff has his legs amputated below the knee. Once regaining consciousness, he reports that he saw the bombers. After identifying them, & with their capture, Jeff is hailed as a hero.

But no matter how much Jeff is hailed, the aftereffects are astronomical. He struggles with the newfound fame & the interviews Patty sets up, much to Erin's chagrin. Patty eventually starts to enable Jeff's alcoholism, & causes him to miss many physical therapy appointments. But Jeff is afraid & his PTSD is becoming worse, forcing him to rethink his relationships.

The performances are exemplary. Jake Gyllenhaal gives one of the best performances of his career. Tatiana Maslany gives her best performance. And Miranda Richardson is almost unrecognizable, disappearing into her character. Honestly, I was shocked to discover in the credits that she was in the film.

David Gordon Green's direction is perfectly subdued. Another film that dealt with the Boston Marathon bombing, 2016's Patriots Day, was a good film, but my main criticism was that the film didn't feel human enough. Well, this film brought that human element that Patriots Day sorely lacked. And that's all thanks to Green & his knack for an inherently human feel.

And John Pollono's screenplay is good. It's a little cliched, & some scenes drag on, but for the most part, it's definitely more than servicable.

This is one of the better survival biopics in years, probably since 2010's 127 Hours. While it feels cliched & somewhat unbearably slow, the performances & direction elevate the film.

Stronger was seen by me at the MJR Marketplace Digital Cinema 20 in Sterling Heights, MI on Saturday, September 23, 2017. It is no longer in theaters in the Detroit area. Its runtime is 119 minutes, & it is rated R for language throughout, some graphic injury images, & brief sexuality/nudity.
at October 30, 2017