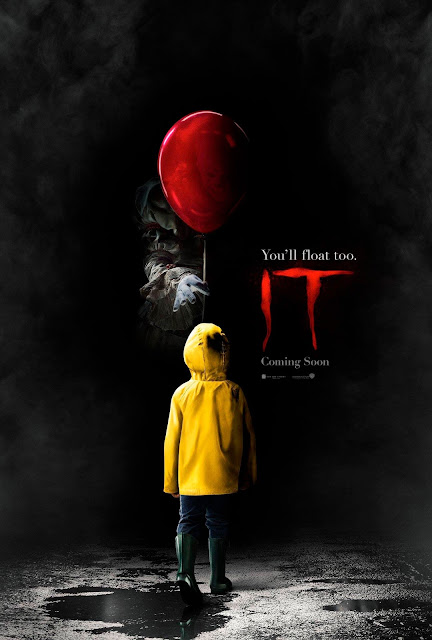 I'm not a horror guy. I'll just put that out there.

I don't see many horror films because: 1. I'm a scaredy cat; & 2. Most recent horror films are awful, as they put an over-reliance on jump scares.

It is an extremely more-than-welcome horror film. It blends the jump scares with an overwhelming sense of dread, something that has been missing in horror films as of late.

Based on Stephen King's 1986 novel & set in the summer of 1989, the film centers on Bill Denbrough (played by Jaeden Lieberher), a twelve-year-old boy in Derry, Maine. Bill's seven-year-old brother, Georgie (played by Jackson Robert Scott), disappeared nine months earlier. Fearful of the bullies who will have free reign towards him for 3 months, Bill takes solace with his friends: foul-mouthed Richie Tozier (played by Finn Wolfhard); hypochondriac Eddie Kaspbrak (played by Jack Dylan Grazer); & mysophobic Stanley Uris (played by Wyatt Oleff).

Meanwhile, Beverly Marsh (played by Sophia Lillis), a burnout who has had rumors about her spread throughout the school, also has to deal with her father's (played by Stephen Bogaert) sexual & physical abuse. Before school ends for the summer, Beverly meets Ben Hanscom (played by Jeremy Ray Taylor), a new kid in Derry who is also bullied for his weight. They immediately take a liking to each other.

During the summer, many kids go missing, just like Georgie. Bill, Richie, Eddie & Stanley go to the Barrens to search for Georgie, whom Bill thinks is still alive. Ben ends up down there after being attacked by the gang of bullies.

The next day, everyone sees visions of their biggest fears & nightmarish visions of Pennywise (played by Bill Skarsgård), a terrifying clown. The 6 kids encounter Mike Hanlon (played by Chosen Jacobs), a homeschooled orphan who is also terrorized by Pennywise. They find that Pennywise assumes the identity of their biggest fear, & appears once every 27 years for 12-16 months. They decide to fight off Pennywise once & for all as "The Losers Club."

The cast is one of the best ever in a horror film. Lieberher, Wolfhard & Lillis are the best out of the young cast. But the standout of the entire cast is Bill Skarsgård, who is absolutely haunting every moment he's on the screen.

Andy Muschietti's direction is astounding. Muschietti, most known for directing the 2013 horror film Mama, is at the top of his game here, setting an overwhelmingly dark & terrifying mood.

Chung-Hoon Chung's cinematography is amazing. The way he frames the characters is excellent, & every shot looks perfect.

The editing by Jason Ballantine is excellent. Ballatine has perfectly paced & assembled this film, & unlike other horror films, he doesn't use a lot of jump cuts.

Benjamin Wallfisch's score is haunting. His score, primarily using a piano, makes an already scary film even scarier, building the terror to a breaking point.

The sound design is excellent. All the sounds in the film manage to scare the absolute crap out of everyone who hears them.

And the makeup & hairstyling is nothing short of amazing, especially the makeup used on Pennywise, which makes It extremely terrifying.

This is one of the best horror films of the century. They sadly do not make horror films like these anymore. I truly cannot wait for It: Chapter Two.

It was seen by me at the MJR Marketplace Digital Cinema 20 in Sterling Heights, MI on Friday, September 8, 2017. It is in theaters everywhere. Its runtime is 135 minutes, & It is rated R for violence/horror, bloody images, & for language.
at September 17, 2017