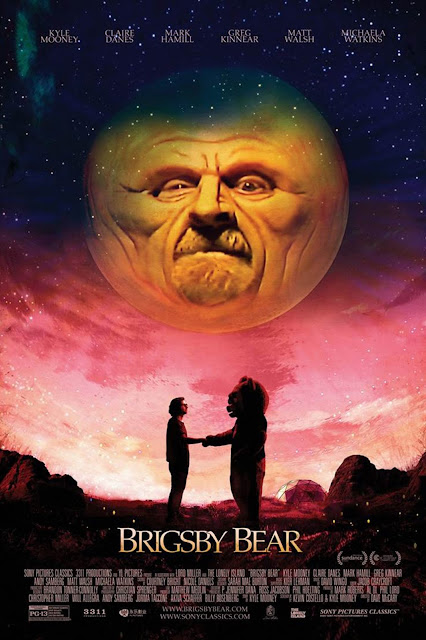 Pop culture is arguably stronger today than it has ever been.

But what if a piece of pop culture is the only thing you know?

Brigsby Bear, one of the most creative films in recent memory, takes this interesting idea & forms it into a one-of-a-kind film. The film focuses on James (played by Kyle Mooney), a sheltered homeschooled kid who lives in an underground home with his parents, Ted (played by Mark Hamill) & April (played by Jane Adams) Mitchum. He's been forced to stay underground due to the supposedly poisonous air. James has been raised on one show: Brigsby Bear Adventures, a children's sci-fi show reminiscent of low-budget sci-fi shows from the 1980's. He owns all the episodes on VHS, & he has so much memorabilia.

One night, a group of police cars come to the house. They barge in, arresting Ted & April, & taking James to a police station. At the police station, Detective Vogel (played by Greg Kinnear) tells James the truth: James was kidnapped from the hospital by Ted & April shortly after he was born; Brigsby Bear Adventures was created specifically for James, so no one else knows of its existence; the air isn't poisonous; & his real parents are Greg (played by Matt Walsh) & Louise (played by Michaela Watkins) Pope, & he has a sister named Aubrey (played by Ryan Simpkins). James struggles to fit in, even with regular family therapy sessions with Emily (played by Claire Danes), as he cannot stop thinking about Brigsby Bear Adventures.

One night, Aubrey takes James to a party at her friend's house. At the party, James meets Spencer (played by Jorge Lendeborg Jr.), an aspiring filmmaker. James tells Spencer about Brigsby Bear Adventures, & Spencer is extremely interested about it. James, Spencer, Spencer's friends Logan (played by Chance Crimin) & Meredith (played by Alexa Demie), Aubrey, & Detective Vogel, who was once an actor in high school, decide to make a Brigsby Bear film to end the series.

The cast is wonderful. It's hard to pick out the best performances. But there are 3 truly excellent performances in this cast. Kyle Mooney's performance is so irresistibly sweet. Greg Kinnear's performance is the funniest of the film. And Ryan Simpkins nails it as the sister who's cold & anxious at first, but eventually warms up.

Dave McCary's direction is excellent. The vision that he has created for this film is unparalleled by any other film this year.

The screenplay by Kyle Mooney & Kevin Costello is amazing. It's endearingly optimistic & sweet at every single moment, & you can't help but be entranced by it.

Brandon Tonner-Connolly's production design is fantastic. From the intricate layout of the bunker, to the sets of the film within the film, the design is just so immersive.

And the original score by David Wingo is amazing. The score is calm & peaceful, driven by Wingo's excellent use of synthesizers.

This is truly the best film of the year so far. It's an endearing tribute to pop culture & its impact on people, & it shows that creativity can come from some surprising places, even tragedy.

Brigsby Bear was seen by me at the MJR Troy Grand Digital Cinema 16 on Friday, August 18, 2017 in Troy, MI. It is in 3 theaters in the Detroit area: the Phoenix Theaters - Laurel Park Place in Livonia, MI; the Emagine Canton in Canton, MI; & the Emagine Novi in Novi, MI. Its runtime is 100 minutes, & it is rated PG-13 for thematic elements, brief sexuality, drug material & teen partying.
at August 28, 2017