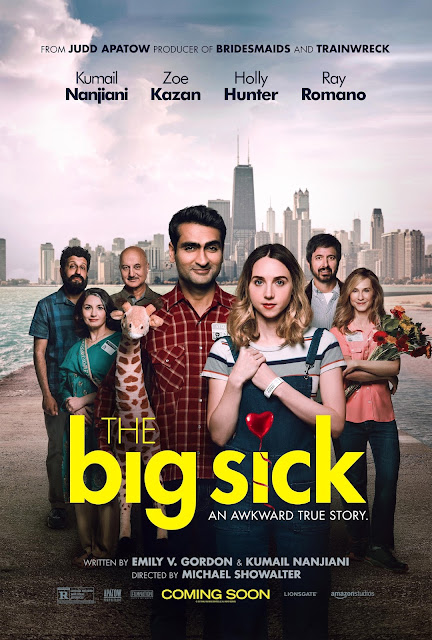 I think we can all agree that a vast majority of romance films, especially romantic comedies, in recent memory have been bad. They're all so predictable, using the same plotline over & over again. Those cliches has been overused so much.

However, every once in a while, we get a romance film that defies these cliches, & becomes a truly great romance film, like Eternal Sunshine of the Spotless Mind, Before Sunrise, Before Sunset, Before Midnight, All the Real Girls, & (500) Days of Summer.

Thankfully, The Big Sick falls in the latter category. Loosely based on the true story of the film's writers, Kumail Nanjiani & Emily V. Gordon, the film focuses mainly on Kumail (played by Kumail Nanjiani), a struggling Pakistani-American standup comedian in Chicago also working as a part-time Uber driver. His Muslim family, namely his mother, Sharmeen (played by Zenobia Shroff) & his father, Azmat (played by Anupam Kher) have been trying to set Kumail up in an arranged marriage, much to Kumail's chagrin.

At one of his shows, Kumail is "heckled" by Emily (played by Zoe Kazan). After at first agreeing not to date again after having a one-night stand, they end up beginning to date. Kumail fears having to tell his family he is dating a Caucasian woman, knowing they would very much likely disown him. But after Emily finds a cigar box of pictures of women Kumail's parents tried to set him up with, Kumail tells Emily that he doesn't think they'll end up together in the end. Heartbroken by this, Emily breaks up with Kumail.

A few weeks later, Kumail gets a call from a friend of Emily's. Emily was sent to the hospital, & Kumail must go there. When he arrives, Kumail is told that Emily must be placed in a medically induced coma, as she has an extremely serious lung infection. After signing off on it, Kumail contacts Emily's parents, Beth (played by Holly Hunter) & Terry (played by Ray Romano). While Beth is cold towards Kumail, Terry tries to be civil towards him. Eventually, the three begin to bond, as Emily's situation gets worse, & as Kumail reconsiders his outlook on life, love, & religion.

Michael Showalter's direction is superb. I'm honestly surprised at his directing abilities, mainly because the only other thing I know Showalter from is from the hilarious comedy Wet Hot American Summer, which is completely different from this on a comedic level. His direction is very subdued, & this film shows his ability of being a great actor's director.

The film's brightest spot is the screenplay. Written by Kumail Nanjiani & Emily V. Gordon, & loosely based on the aformentioned true story of their relationship, the screenplay deals with love in a realistic way unlike many films in recent memory. It also deals with many other complex issues, like illness, religion, & culture. And it hits that perfect balance between comedy & drama.

This is definitely one of the best films of the year so far. It has an absolutely astonishing true story behind it that sucks you in & doesn't let you go.

The Big Sick was seen by me at the MJR Troy Grand Digital Cinema 16 in Troy, MI on Wednesday, July 12, 2017. It is in theaters everywhere. Its runtime is 120 minutes, & it is rated R for language including some sexual references.
at July 19, 2017