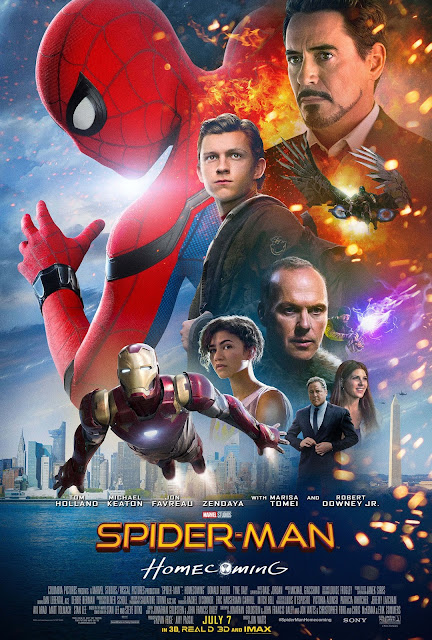 Spider-Man has always been my favorite superhero since childhood, & even through the years where I wasn't big on superheroes. His powers & his identity are what drew me to him.

The Spider-Man film series with Tobey Maguire was excellent, & I loved all 3 films, even Spider-Man 3, which a lot of people haven't liked for its different tone than its predecessors.

The Spider-Man film series with Andrew Garfield was good, but both films could've been better. Both films were too long & their scripts had too many ideas to fit the already long runtime.

And now we have Spider-Man: Homecoming, an excellent beginning of a new Spider-Man film series, now with Tom Holland as Peter Parker, AKA Spider-Man. As Holland's Spider-Man was introduced in Captain America: Civil War, the film focuses on Peter after becoming Spider-Man, & thus after being drafted into the Avengers by Tony Stark, AKA Iron Man (played by Robert Downey Jr.). Although he is not ready yet to become an official Avenger, Stark assures Peter that they will contact him when they need him, & Stark has his former bodyguard, Harold "Happy" Hogan (played by Jon Favreau) keep an eye on Peter.

Peter has struggled to keep his private life & his superhero life separate, & he is struggling even more as he tries to keep it secret from everyone, especially his friends, Ned (played by Jacob Batalon) & Michelle (played by Zendaya), & his Aunt May (played by Marisa Tomei). All of these struggles lead to him to drop out of his extracurricular activities to focus on being Spider-Man.

Meanwhile, Adrian Toomes (played by Michael Keaton), a disgruntled salvager who was fired from cleaning up after the Battle of New York (as depicted in The Avengers), has become an arms trafficker known as Vulture, & he has been in possession of a huge amount of extremely powerful weapons. As Peter has been trying to test his limits of being Spider-Man, Vulture commits more crimes, & Peter must stop him, but must also learn the old adage that with great power comes great responsibility.

The cast is excellent. Tom Holland brings a fresh, new, youthful look to Peter Parker/Spider-Man, who has been de-aged to 15 in this film. Michael Keaton, whose career has had a renaissance as of late, is absolutely intimidating as the villain.

Jon Watts, who is most known for directing the 2015 indie drama Cop Car, directs this film with great precision, especially in the action sequences.

The screenplay by Jon Watts, Jonathan Goldstein, John Francis Daley, Christopher Ford, Chris McKenna & Erik Sommers is excellent. The script has a light tone, a stark contrast from recent films in the Marvel Cinematic Universe, & a lot of dry wit, which works a lot in the film.

Michael Giacchino's score is a vast improvement over his last score for The Book of Henry. Giacchino shows that it was only a small demerit on his record with his excellent score here.

The sound editing & sound mixing are excellent, as the sounds make you feel like you're right in the midst of the action.

And the visual effects are excellent. The effects of the explosions & the superhero outfits worn are absolute spectacles.

Spider-Man: Homecoming was seen by me at the MJR Marketplace Digital Cinema 20 in Sterling Heights, MI on Monday, July 10, 2017. It is in theaters everywhere. Its runtime is 133 minutes, & it is rated PG-13 for sci-fi action violence, some language & brief suggestive comments.
at July 18, 2017