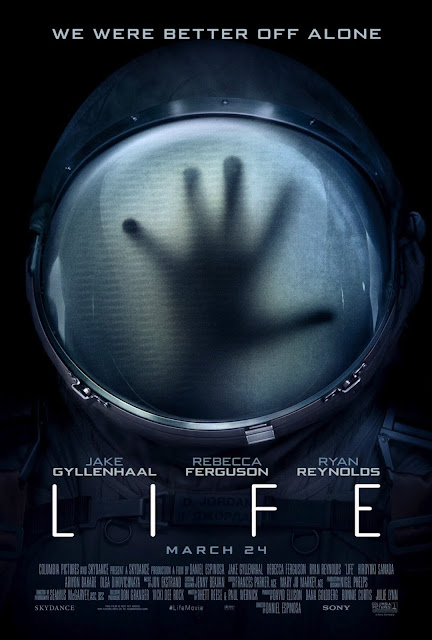 "Goodnight, nobody." That's a sad & scary quote from Jake Gyllenhaal in Life, a pretty good but flawed sci-fi horror film. Gyllenhaal plays David Jordan, an American senior medical officer on the International Space Station. Also on the ISS are: British quarantine officer Miranda North (played by Rebecca Ferguson); American system engineer Rory Adams (played by Ryan Reynolds); Japanese pilot Sho Murakami (played by Hiroyuki Sanada); British biologist Hugh Derry (played by Ariyon Bakare); & Russian commander Ekaterina Golovkina (played by Olga Dihovichnaya). They have just completed a mission to capture a probe from Mars featuring a soil sample possibly proving life beyond Earth. A dormant cell from the sample grows into a single-cell organism named Calvin. After it is revived using electrical shocks, it becomes hostile & attacks Hugh. As Calvin begins to grow in size & become more dangerous, the crew realizes the lack of oxygen on Mars kept it dormant, & that if it comes back to Earth with them, the consequences will be disastrous. The crew must try to kill Calvin before they return to Earth.

The cast is amazing. Daniel Espinosa's direction is great. The screenplay by Rhett Reese & Paul Wernick is good. The cinematography by Seamus McGarvey is excellent. The editing by Frances Parker & Mary Jo Markey is excellent. The production design by Nigel Phelps is amazing. And the visual effects are stunning. Although the direction is a bit underwhelming & the screenplay is somewhat unfocused, the cast & technical elements save the film from being a disaster & make it an overall good film.
at April 23, 2017