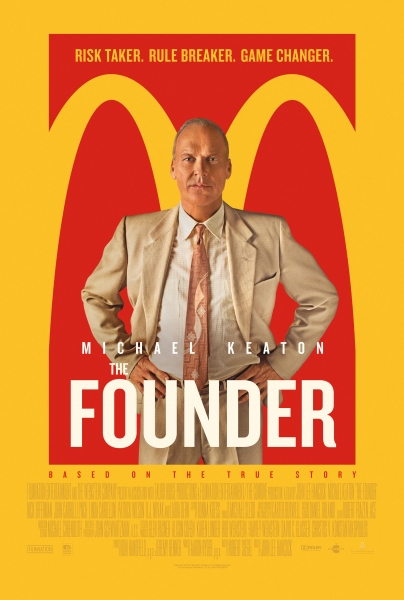 "Contracts are like hearts. They're made to be broken." That's a LEGENDARY quote from Michael Keaton in The Founder, one of the best films of the year. Keaton plays Ray Kroc, a struggling milkshake salesman in 1954. His wife, Ethel (played by Laura Dern) supports him, & they live comfortably, but Ray craves more. One day, Ray is sent by the milkshake company to San Bernardino, California, to finalize a deal with a hamburger restaurant to sell 8 milkshake machines. The restaurant is McDonald's, founded by brothers Richard "Dick" (played by Nick Offerman) & Maurice "Mac" (played by John Carroll Lynch) McDonald. When he arrives there, Ray is stunned by the fast service, high-quality food, disposable packaging, & family-oriented atmosphere. Ray then meets with Dick & Mac, & is taken on a tour of the restaurant. After that, the three go out to dinner, & discuss how McDonald's was created. Dick & Mac came to Los Angeles to work in the film industry after growing up in poverty. After the Depression, the brothers decided to open up a hot dog stand, & from there, they decided to expand & create a diner that sells food at a low cost, is made quickly, & doesn't sacrifice quality.

Ray comes back & tells the brothers to franchise the restaurant, but is told by the brothers that this was tried before but they were unable to maintain quality throughout the restaurants. Eventually, they do franchise, with Ray agreeing to a contract that all business decisions go through them. But there is something sinister up Ray's sleeve that eventually turns McDonald's into the mega-fast food chain it is today.

Michael Keaton's performance is one of the 3 best of his career, along with his performance in 2014's Birdman & 2015's Spotlight, & he was robbed of an Oscar nomination. John Lee Hancock's direction is excellent, & it's his best film yet. Robert D. Siegel's screenplay is brilliant. The cinematography by John Schwartzman is amazing. The film editing by Robert Frazen is excellent. The production design by Michael Corenblith is amazing. And the film score by Carter Burwell is amazing, as always. This is an excellent biopic.
at January 26, 2017