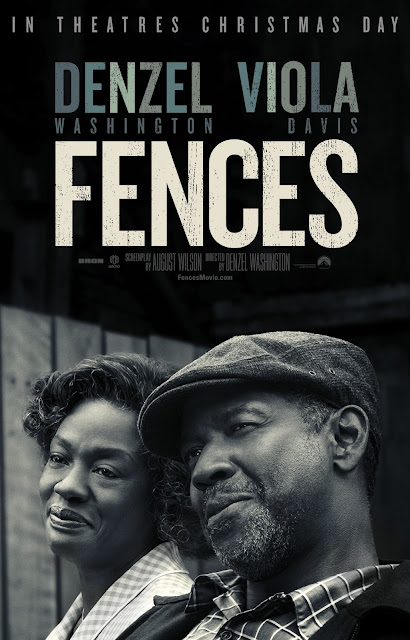 "It's not easy for me to admit that I've been standing in the same place for 18 years!" "Well, I've been standing with you! I've been right here with you, Troy! I got a life too! I gave 18 years of my life to stand in the same spot as you!" That's an excerpt of a brutally honest & intense argument between Denzel Washington & Viola Davis in Fences, one of the best-acted films of the year. The film is based on the 1983 play of the same name by August Wilson. Set in 1950's Pittsburgh, Washington plays Troy Maxson, a former Negro League baseball player who now works as a trash collector, alongside his friend, Jim Bono (played by Stephen McKinley Henderson). Troy believes it was the fact that he was black that he never made it to Major League Baseball, but it was really because of his age. Troy lives with his wife, Rose (played by Viola Davis), & his son, Cory (played by Jovan Adepo). Troy's brother, Gabriel (played by Mykelti Williamson) lives close by, but suffers from a mental disability caused by a head injury during World War II. Also, Troy's son from a previous relationship, Lyons (played by Russell Hornsby), stops by infrequently to borrow money from Troy, which upsets Troy, as he believes Lyons should get a real job instead of being a musician.

One day, Cory gets scouted by a college football team, much to Troy's dismay, as he doesn't want to see Cory fail like he did, but he also doesn't want his son to be more successful than him at sports. But this is only the first of many pitfalls, as Troy has been hiding a huge secret, a secret that could lead to his downfall.