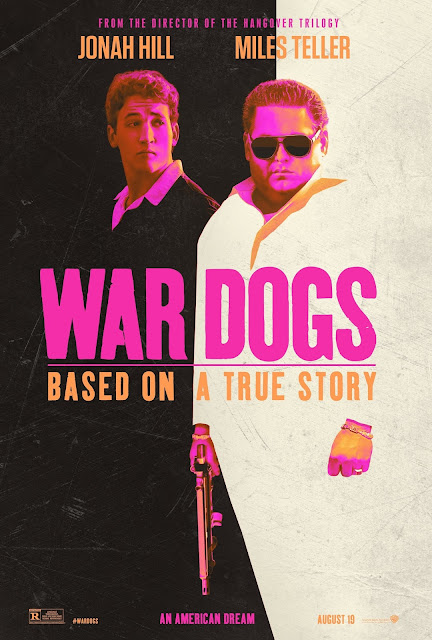 "GOD BLESS DICK CHENEY'S AMERICA!" That's an absurdly hilarious quote from Jonah Hill in War Dogs, one of the funniest & best films of the year. The film is based on the book Arms & The Dudes by Guy Lawson. Hill plays Efraim Diveroli, who, in 2005, started a company called AEY Inc., which fills arms orders for the government for the war in Iraq, & gives his best friend, David Packouz (played by Miles Teller), a high-ranking job in the company. Packouz, although he is unsupportive of the war, takes the job on account of the fact that his also-anti-war girlfriend, Iz (played by Ana de Armas) is pregnant, his massage therapy job isn't paying much, & he's not good at selling bedsheets. Efraim tells David to bid for the smaller arms orders that still cost millions of dollars. One of these orders, an order of Berettas, sends them right to Iraq, after an arms embargo from Italy to Iraq deroutes the shipment to Jordan, but instead of waiting of a permit to fly the shipment to Iraq, they instead drive to Iraq & finish the deal, putting them on the map.

Eventually, Efraim & David secure larger deals for more money, including a multi-million dollar deal to supply Afghanistan with AK-47 ammunition, but it sends them on a downward spiral caused by Efraim's instability & rising ego & a partnership with Henry Girard (played by Bradley Cooper), an arms dealer on the US terrorist watchlist.

Hill & Teller were extraordinary, with Hill playing against type by portraying a person with a growing antagonistic mindset, & Teller showing off more of his acting range. The direction from Todd Phillips was great. The screenplay from Phillips, Stephen Chin & Jason Smilovic was also brilliant. The editing from Jeff Groth was excellent. The cinematography from Lawrence Sher was breathtaking. And the soundtrack was amazing, showing that 2016 is a great year for film soundtracks. This is definitely one of the funniest & best films of the year so far, perfectly depicting the monstrosities of war & arms dealing.
at September 01, 2016