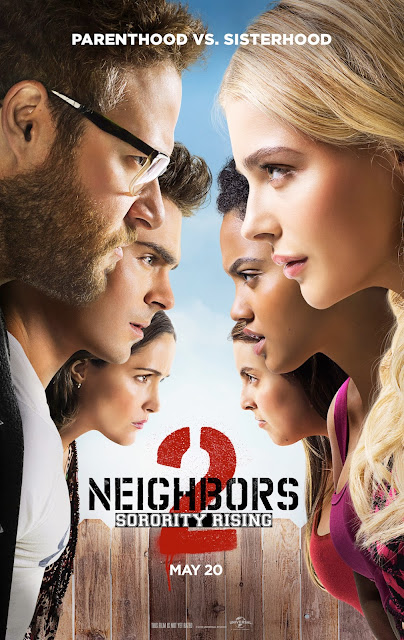 "They are using their sexuality as a weapon!" That hilarious Seth Rogen quote is one of a few hilarious quotes in Neighbors 2: Sorority Rising, a hilarious sequel to 2014's Neighbors that almost reaches the first film's comedic heights. The film continues the story of Mac (played by Seth Rogen) & Kelly Radner (played by Rose Byrne), who are trying to sell their home, now that they are expecting another child, alongside their first child, Stella (played by Elise & Zoey Vergas). A young couple is looking to buy the home, & though Mac & Kelly are excited to buy a new home, they are told that they are in escrow for 30 days. Also, their once-again married friends Jimmy (played by Ike Barinholtz) & Paula (played by Carla Gallo) are expecting as well. Meanwhile, Teddy Sanders (played by Zac Efron) is living with Pete (played by Dave Franco) & Pete's boyfriend Darren (played by John Early). Pete & Darren are getting married, so Teddy has to move out. And also, college freshman Shelby (played by Chloë Grace Moretz), disillusioned with the fact that sororities can't throw parties, teams up with fellow college freshmen Beth (played by Kiersey Clemons) & Nora (played by Beanie Feldstein) & create a new sorority, Kappa Nu, &, with the help of Teddy, sets it up at the house next door to Mac & Kelly, the same house that Teddy's fraternity used to live in the first film. The girls' parties eventually become successful, much to the chagrin of Mac & Kelly, who try to complain to Dean Gladstone (played by Lisa Kudrow), who denies their complaint once again. Eventually, Teddy is voted out by the girls, & teams up with Mac, Kelly, Jimmy & Paula to take down Kappa Nu.

Rogen, Efron & Byrne are hilarious again, but Chloë Grace Moretz was by far the most hilarious in the film, along with Clemons & Feldstein. Nicholas Stoller's direction is solid, & the screenplay by Stoller, Rogen, Evan Goldberg, Andrew J. Cohen & Brendan O'Brie is solid as well. It does fall short of Neighbors, but it certainly is one of the funniest films of the year so far.
at August 03, 2016