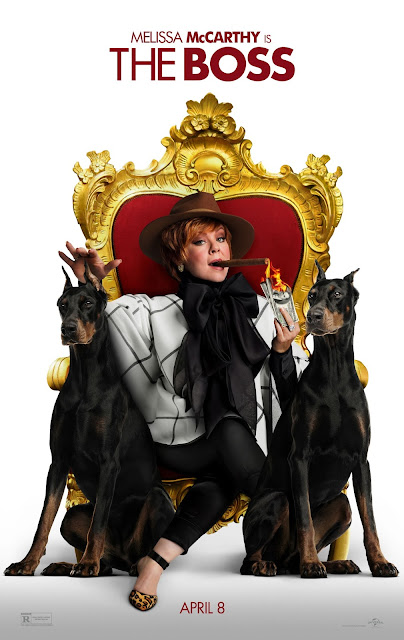 ★★★ | A Review by Cameron Kanachki

"Oh! That batch is burnt!" That's a hilarious quote from the always hilarious Melissa McCarthy in the new comedy The Boss, a funny film that does disappoint at times. McCarthy plays Michelle Darnell, a Martha Stewart-type businesswoman who proudly says that she is the 47th-wealthiest woman in America. She was adopted & returned 3 times in her childhood, eventually giving her a will to succeed & a vulgar sense of mind. Her enemy & former lover Renault (played by Peter Dinklage) finds out that she has been committing insider training. Right after leaving an interview, she is arrested & convicted for insider trading, & sentenced to 5 months in prison. When she leaves, she discovers that her assets have been frozen, & she must now find a new place to live. She then decides to move in to the Chicago apartment of her former assistant Claire (played by Kristen Bell). After doing nothing & sitting on the couch for 3 weeks, Michelle is told by Claire to take her daughter, Rachel (played by Ella Anderson) to a Girl Scouts meeting. After realizing that the girls don't profit from selling cookies, Michelle decides to start her comeback by creating a brownie empire. Claire reluctantly agrees to help out, & Michelle & Rachel gather recruits to start her comeback.

The film was funny, even though it did fall apart in the second half. Melissa McCarthy was hilarious once again, proving that she is one of the funniest women out there. The direction from McCarthy's husband Ben Falcone was solid at best, & mediocre at worst. The screenplay from Falcone, McCarthy, & Steve Mallory was good. Overall, this is a good comedy that does have several faults.
at April 10, 2016